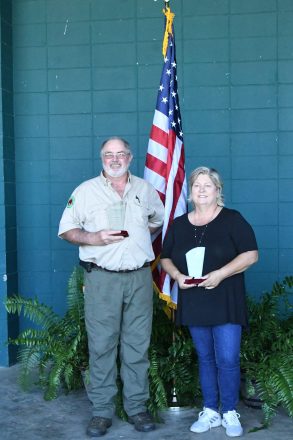 Friday afternoon, The Bainbridge- Decatur County Chamber of Commerce held their annual Ag Appreciation Luncheon to thank those who drive Bainbridge’s economic development through agriculture. Additionally, they provided a to-go lunch and set up a tailgate at the Earle May Boat Basin that allowed for everyone to hear from keynote speaker, Will Bentley. It also allowed them to see who won the coveted Ag Man & Woman of the Year Awards.

The program began with a blessing before Agriculture Committee head, Clint Beckham introduced Bentley.
Bentley is president of the Georgia Agribusiness Council, which strives to advance the business of agriculture through legislative advocacy, economic development, environmental stewardship and leadership development. Prior to joining the GAC, Bentley served as the Executive Vice President of the Georgia Cattlemen’s Association and the Georgia Beef Board.

Bentley currently resides in Macon, Ga., where he and his family own and operate Bentley Farms, an Angus- based, commercial cow-calf farm.

Bentley thanked Beckham for his introduction before speaking on the impact the agriculture industry has in the state of Georgia.

Bentley went on to explain how this impacts the state level.

“This makes our industry the biggest in the state by a long shot,” Bentley said proudly.

Bentley said the top commodities in the state of Georgia are poultry, eggs, cotton, beef- cattle, timber and finally peanuts.

Not only is it big in Georgia, but across the U.S., Georgia ranks as number one in poultry, eggs, peanuts and blueberries and number two in cotton and pecans.

“That’s a big deal when it comes to dollars, but also in jobs,” Bentley said. “399,000 jobs are created in Georgia by what farmers do.”

Bentley ended his speech by thanking farmers for their continuous hard work and providing three meals a day, along with the clothes to put on his back.

Smith, also known as “Boot Man,” was raised on a shade tobacco farm in Fowlstown, Ga. to T.E. and Inez Smith.

When shade tobacco left the area, Smith worked with his dad on row crops, mainly focusing on corn and peanut production. Following his father’s retirement, Smith continued to work on his own and eventually began working at the Georgia Forestry Commission during the day, while still coming home to farm at 4:30 every afternoon.

While working at the Georgia Forestry Commission, Smith decided to end his journey row-cropping and change the farm to strictly cattle and hay, naming the farm Plantation S Cattle Co.

Now on the brink of retirement from the Forestry Commission, Smith has said he still plans to run more cattle and bale more hay in the days to come.

Smith was honored to receive the award and be in the presence of what he considered the great farmers of Decatur County. He then turned it over to Anne Samson, who presented the award for Ag Woman of the Year to Claire Powell.

Powell was born and raised on a farm in Lee County, Georgia. She spent her days learning about row cropping, produce and cattle, before attending the University of Georgia.

There, she graduated with a degree in Agricultural Economics, which she put to work at her first job at Farm Credit. After years of working at the company, she finally decided to follow her first love of farming and began a career with her husband.

They now own a 190-acre pecan and satsuma farm in Faceville, Ga.

Since the move, Powell has had her hands full managing farm finances and bookkeeping, along with scouting, mowing, managing irrigation and spraying herbicide, all while still providing a loving home for her children to grow up in.

“She is proof to us all that God did in fact make a farmHER and that from a little dirt, a flower blooms,” Samson said.

Powell thanked everyone for their kind words and said it was her honor to stand next to Boot Man.

The program then concluded with a local farmer winning a smoker and the Chamber thanking those who “worked in acres not hours.”

Bainbridge High School’s One- Act play is back, and this month they will be performing Hairspray Jr. Drama and chorus... read more