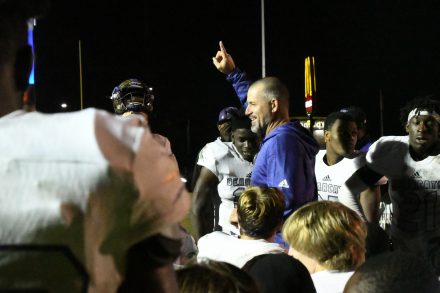 Head Coach Jeff Littleton smiles and holds up a number one after winning the title of Region Champs on Friday night.

Tensions briefly boiled over when the Bainbridge Bearcats faced off against Thomas County Central High School Yellowjackets Friday night, with a fight briefly breaking out on the field. Despite this spat, the Bearcats weren’t kept back, still managing to secure a huge 37-14 win.

The first quarter saw Rashad Broadnax scoring with a 13- yard run at 11:15, with Nicholas Tyre kicking the field goal. Braxton Johnson successfully received a 6-yard pass from Quayde Hawkins at 6:41, with Blake Fagan kicking. Hawkins finished the first quarter with an impressive 30-yard run as the clock ran out, with Tyre kicking again.

Bainbridge didn’t score again until the third quarter at 9:59, with Broadnax receiving a 10-yard pass Hawkins, with Fagan kicking.

Finally, in the fourth quarter TCC safety Taylor Persean was tackled in the end-zone by Octavious Green. Zion Bouie finished scoring at 5:14 with a 15-yard interception, with Tyre kicking.

“We were able to run the ball and keep the clock running,” Head Coach Jeff Littleton said afterward. “We made explosive plays. We missed some tackles, that’s something we’ve got to work on, but that’s also a credit to their players. They’ve got some good players.”

When asked what the team would work on between now and their upcoming game with Monroe, he simply said, “Keep getting better. One percent better.”

As of this victory, the Bearcats are currently Region Champions. Their next game will be next week at home, versus Monroe County. Kickoff is at 7:30 p.m. and it will the final game before they head to playoffs.