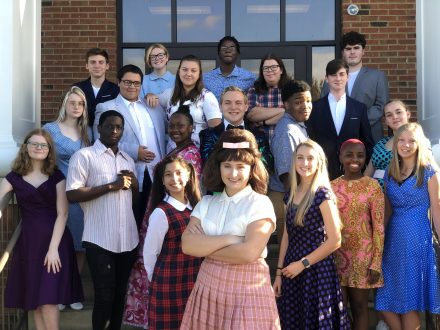 The cast of Hairspray Jr. smiles before their practice on Monday afternoon. They will be holding two viewings.

Bainbridge High School’s One- Act play is back, and this month they will be performing Hairspray Jr.

Drama and chorus teacher, Leigh Powell chose the popular musical back in March. She said she already had a cast in mind and envisioned the characters as students in her one act class.

Since picking the musical, Powell has used it as an educational tool in the wake of Black Lives Matter demonstrations.

For those unfamiliar with the musical, lead star Tracy Turnblad is a teenager whose dream it is to dance on The Corny Collins Show, a local TV dance program. When Tracy wins a role on the show, she becomes an overnight celebrity and advocates for social change as she campaigns for the show’s integration.

The One- Act competition has been moved to February, so for the first time that Powell knows of, the troupe will get to perform in front of the Bainbridge High School students.

“We had to move from the Kirbo Center, just to be precautious,” Powell said. “I do think this will present a cool opportunity for theatre goers, though. It will be similar to a theatre in the round.”

Powell looks forward to seeing everyone there and thanks patrons in advance for their support of the Bainbridge High School Drama and Arts Department.

The Bearcats traveled to Hugh Mills Stadium on Thursday night for their region game against the Westover High School Patriots.... read more