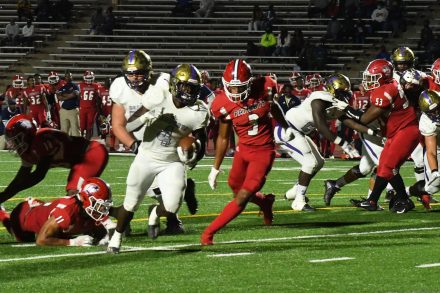 The Bearcats traveled to Hugh Mills Stadium on Thursday night for their region game against the Westover High School Patriots. In their toughest battle yet, the Bearcats eventually came out victorious 28-14.

Both teams started out strong.

The first quarter started off with the Bearcats scoring with 3:31 left in the first.

Wide receiver Monteric Robertson received a 6-yard pass from quarterback Quayde Hawkins and ran into the end zone. Nicholas Tyre then made the kick and it was good, giving the Bearcats a 7-0 lead.

Going into the second quarter, the Patriots were determined to not enter the locker room without points on the board. With only 55 seconds left in the half, Patriot Dailan Hall received a 15-yard pass from Keyshay Walton and ran it for a touchdown.

Raykwon Thurston then made the kick and it was good, tying up the score.

Coming out of halftime, it was neck and neck.

The Bearcats entered the third quarter, making a touchdown after gaining 69 yards in 11 plays.

Wide receiver Braxton Johnson caught a 13-yard pass from Hawkins and ran into the end zone with 6:34 left in the third. Tyre made the kick and it was good.

The Bearcats were leading 14-7, but not for long.

The Patriots came back after gaining 68 yards over nine plays and ran for a touchdown with 2:31 left.

Patriot Rodney Bullard caught an 11-yard pass from Walton, before scoring. Thurston made the kick again, and it was good.
Tied up again, it all came down to the fourth quarter.

Sophomore running back Dante Broadnax was on the field, when he caught a fumble return and ran it for 36 yards, giving Bainbridge the lead.

Tyre made the kick and it was good.

Bainbridge pulled out in the win in the last three minutes of the fourth quarter, when Rashad Broadnax made a 7- yard run with only 2:20 left on the clock.

Tyre made one final kick, giving the Bearcats a final score of 28-14.

Head Coach Jeff Littleton was proud of the team for their fourth win in a row and third region win.

“Defense played well all night,” he said. “We did some things that put us in bad situations at times like blown coverages, but those are the mistakes you’re going to make when you play against a good football team.”

However, Littleton praised the team for not letting those mistakes get to them, and instead picking themselves up.

“We stayed together and we kept making plays; that’s what happens when you play hard, good things happen, and we played hard,” Littleton said.

Littleton said the team has been focusing hard during practice and working on execution.

“Wins will happen when you put in work during practice, if you do that you can win each week,” he said. “The scoreboard will take care of itself.”

The Bearcats will now face off against region opponent TCC in Thomasville next Friday at 7:30 p.m.

Wiley Griffin (I) won the race for Sheriff in a highly contested race on Tuesday night, while Bobby Barber Jr.... read more