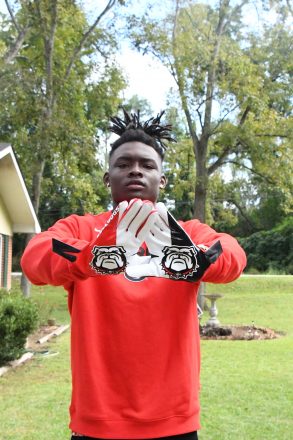 Deyon “Smoke” Bouie holds up his hands in his new football gloves after committing to the Bulldogs on Sunday afternoon.

Five-star athlete and Bearcat Wide Receiver, Deyon “Smoke” Bouie surprised his mother on her birthday on Sunday by verbally committing to play football at University of Georgia.

UGA was Bouie’s first offer after winning the state championship in 2018 when he was just a freshman.

Upon receiving UGA’s offer, Bouie’s other offers started pouring in. He received offer letters from Oregon, Florida, FSU, Auburn, Alabama and LSU among others.

As the offers continued to come, Bouie began to seriously consider his future and started touring the campuses and athletic facilities to see where he felt most at home.

It quickly became clear that UGA was a family favorite.

“When children go off to school they often need counseling and need someone who can get there right then,” Brooks said. “If children get off too far, their parents, coaches and grandparents can’t get to them immediately; if he (Bouie) calls and says ‘Grandaddy I need you’ I want to be able to get there that day.”

Not only did Bouie receive encouragement from his grandfather, but it was also his uncle’s alma mater.

“It was sort of a family tradition to go there,” Bouie said. “I also developed a really close bond with Special Teams Coach Nick Williams and I didn’t want to break that.”

Bouie’s mother, Maria also said she had a feeling he would attend UGA, despite her being an FSU fan.

Maria said she always knew in the back of her mind Smoke would play college football.

“When he first started playing about 7 or 8, I saw the talent,” she said. “I actually had to make him play his seventh grade year, he didn’t want to play that year, but I knew he needed to.”

Smoke admitted he realized he had a special talent as well, when he noticed he was outrunning all the kids on his team. When asked why he almost gave it up, he said he was torn because he also had a passion for basketball, but he is thankful his mom made him play.

“I’ve haven’t stopped playing ever since then,” he said.

Maria was a track star, while his father was a running back at Cairo High School.

“This gave him (Smoke) speed and power at the same time,” Brooks said. “His dad also showed him footwork that I’ve seen used on the field; Georgia is going to be really surprised at the skills he (Smoke) has.”

Coach Jeff Littleton echoed Brooks’ statement saying that Smoke is a very talented athlete, who he expects to see great things from.

“I just want to say thank you to my family and coaches for pushing me to be the best I can be,” Smoke said. “I really look forward to being on the UGA campus and experiencing college life.”

Smoke will graduate in the class of 2022, where he will then venture to Athens to play for the Bulldogs.