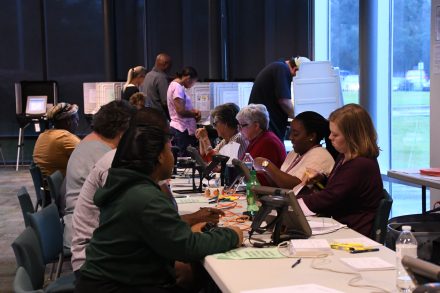 Voters fill out their information sheets and provide their license or ID as they prepare to cast their ballots on Election Day.

Wiley Griffin (I) won the race for Sheriff in a highly contested race on Tuesday night, while Bobby Barber Jr. was elected as Decatur County Commissioner, District 5.

County Commissioner for District 2, Steve Brock ran unopposed for his seat, along with Dennis Brinson for District 3.

Sunday package sales of alcohol were given a “yes,” receiving 7,326 votes in favor of the referendum, while 4,015 voted “no.”

However, Trump won the popular vote in Decatur County and received 6,752 votes, while Biden received 4,772.

David Perdue (I) was leading for the US Senate seat against Jon Ossoff. Perdue received 6,690 votes locally, while Ossoff received 4,557.

Jason Shaw (I) was leading the race for Public Service Commissioner, District 1. He received 6,544 of local votes, while Robert Bryant received 4,402.

Public Service Commissioner, District 4 was being led by Lauren McDonald, Jr. (I). She received 6, 409 votes, while Daniel Blackman received 4, 470.

In a twist, Sanford Bishop (I) was losing for US House District 2. He received 5,119 votes, while Republican Don Cole received 6,249 votes locally.

Representative Darlene Taylor (I) won the State House District 173 race with 2,223 votes being cast for her, while opponent Booker T. Gainor received 1,298.

BY ETHAN REDDISH Friday night, the Bearcats faced off against an opponent very far from home, the Dade Christian Crusaders,... read more