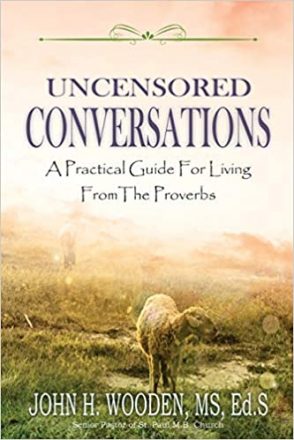 John Wooden’s book, pictured above, is now available on Amazon and at Barnes and Noble.

Wooden recently published his first book, Uncensored Conversations A Practical Guide For Living From The Proverbs.

The 24-chapter book gives advice on a variety of topics. The topics range from strengthening relationships to goal setting and financial advice. While Wooden gives advice, he is also walking his readers through the book of Proverbs and making the verses relevant and practical to the advice he is giving.

Wooden dedicated the book to his wife, daughter, mother and grandchildren. Wooden said he wanted to have something for them to look back on when he’s gone.

“I’ve been in the education system for over 30 years, I’ve served as a pastor, I’ve been in the welfare system and risen from janitor to Assistant Superintendent and I felt like it’s my job to leave that wisdom I’ve gained with someone else,” Wooden said.

Now, Wooden has shared his wisdom with hundreds.

Wooden’s book became available on Amazon’s website and in person at Barnes & Noble. The results, he said, have been astounding.

“I’ve sold over 200 copies at Barnes & Noble and shipped more than 300 copies across the United States,” Wooden said.

When asked how does he think his book rose in the ranks, Wooden gave all the glory to God.

“While writing this book, I was always praying,” Wooden said. “I asked the Lord to give this book wings if it was meant to help others and I’ve been blown away at the support.”

Wooden has received support locally at his book signings, but the real support comes from social media posts his classmates have made. He said his classmates are posted all over the country and have been sharing the book with neighbors and relatives, encouraging them to purchase it.

Wooden couldn’t have imagined how much press he would receive. He will be appearing on a radio show in Albany soon and hold a book signing in LaGrange and Tallahassee.

During his radio show, he hopes to discuss his second book he is working on.

That’s right; readers can rejoice as Wooden said he plans to have another book out by Christmas.
He said his first book was a springboard for his second project, which will focus on leadership.

From this point on, Wooden said he wants to commit to writing two books a year.

Wooden thanks everyone for their support, especially local businesses such as Reeves Gifts Jewelry & More and Rickey’s Buffet for allowing him to hold book signings. He encourages everyone to grab a copy or show it to a friend, who may need inspiration from the Proverbs.