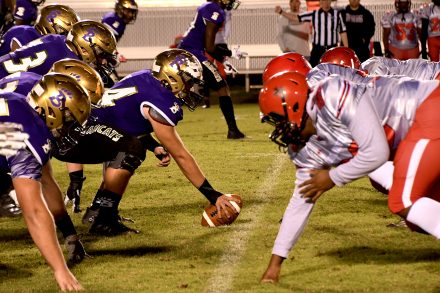 The Bearcats and Crusaders prepare for the opening play during Friday night’s game at Centennial Field.

Friday night, the Bearcats faced off against an opponent very far from home, the Dade Christian Crusaders, in a non-regional game. The Bearcats took the lead in the second quarter, ultimately winning 35-13.

Rashad Broadnax kicked things off in the second quarter scoring a 4- yard run with 7:27 left. Blake Fagan made the kick and it was good, giving the Bearcats a 7-0 lead.

Braxton Johnson then received an 18 -yard pass from Quarterback Quayde Hawkins, with 25 seconds left on the clock. Nicholas Tyre made the kick and it was good.

In the third quarter, Broadnax came out strong again and scored a 4- yard run with 8:00 left. Fagan made the kick and it was good.

The Crusaders finally got on the board during the third quarter.

Joshua Webb made a 67- yard run, with Alessandro DiClemnente making the kick.

The Bearcats refused to risk the Crusaders make a comeback.

Johnson then received a 55- yard pass from Hawkins with 6:45 left in the third quarter. Tyre made the kick, leaving the Bearcats with a 28-7 score.

In the fourth quarter, Broadnax scored again on a 3- yard run, with Fagan kicking.

The Crusaders put more points on the board, when Darian Anderson made a 65-yard punt return after the pass was intercepted.

“We had a rough start, but we finished and that’s all that matters,” Coach Jeff Littleton said after the game. “We made some mistakes offensively, but defensively played really well to start with… We were able to pick it up in the second half and finish it.”

The next game will be an away game on Thursday, versus Westover at Hugh Mills Stadium in Albany. Kickoff is at 7:00 p.m.

Now, at age 95, Bennie Brookins can look back at a life well spent serving others. He was recently awarded... read more