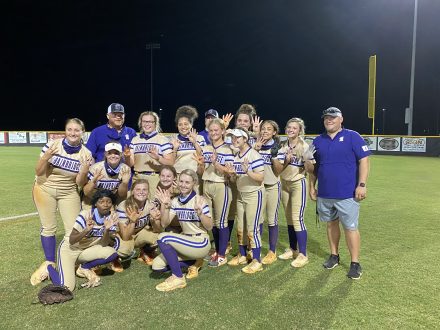 Lady Cats slam it out of the park, advance to Elite Eight

The Lady Cats went up against Jenkins last week in the second round of the playoffs. Following a shutout victory in the first game of the doubleheader 8-0, the Lady Cats took another win 14-3 to advance to the Elite Eight.

The first game was a combined effort of Lexie Delbrey’s pitching and hits made by the team.

The Lady Cats opened up scoring in the first inning.

It was the third inning before either team scored again.

Jenkins’ pitcher walked Wenda Sheffield. Conley then stepped up to the plate again, while Sheffield stole second. Conley hit another grounder, allowing Sheffield to score and giving the Lady Cats a 2-0 lead.

Delbrey then stepped up to the plate, allowing Conley to advance to second. Delbrey hit a sacrifice bunt and was called out at first base.

Halle Cannon stepped up to the plate, where she hit a home run to left field, bringing home Conley and herself. The Lady Cats then led 4-0 heading into the 4th inning.

In the bottom of the fourth, the Lady Cats scored again. Haylee Nix doubled on a fly ball and stole third, while Emily Mccullough was up to bat.

The Lady Cats brought in three more runs during the bottom of the fifth inning, finalizing their win.
Brinson hit a single on a bunt before Conley stepped up and also hit a bunt. Jenkins’ first baseman made an error, allowing Conley to run to third, while Brinson scored.

Delbrey ended the game with a homerun to center field, bringing home Conley and herself for a final score of 8-0.

“We really focused on the small ball game and bunting during this week’s practice and it paid off,” Coach Christopher Bryant said.

Delbrey got the win for the Lady Cats, pitching five innings, allowing one hit, zero runs and striking out 14.

The Lady Cats came out explosive in the second game of the day, and once again kicked things off in the first inning.

Brinson hit a fly ball, before Conley was walked. Delbrey was then hit by the pitcher, causing the bases to be loaded; that’s when Cannon stepped up to the plate.

Following her already stellar hitting record from game one, she doubled and brought home Brinson and Conley.

Kailyn Wilson then hit a ground out, allowing Delbrey to score and courtesy runner, Megan Breeden to score.

The Lady Cats went in to the dugout with a 4-0 lead.

Jenkins refused to give up and scored twice in the bottom of the first.

The Lady Cats didn’t let them get far, before scoring 7 runs in the second inning.

Diah Brown began the huge inning with a bunt, before Sheffield hit a ground ball, allowing Brown to reach third and Sheffield to reach second base.

Brinson stepped up to the plate doubling on a fly ball and bringing in Brown and Sheffield.

With Brinson on second, Conley hit a ground ball, allowing Brinson to make it to third, before Delbrey hit a hard grounder and brought home Brinson and Conley.

Cannon was walked, before she stole second, while Wilson was batting.

Jenkins then attempted to pass the ball and get out Cannon, allowing Delbrey to score. Wilson then hit a single line drive and brought home Cannon, making the score 10-2.

After several hits, Wilson was able to score on a passed ball and finish the inning 11-2.

The top of the third was another big inning for Cannon, who scored a home run on the second play of the inning.

The Lady Cats scored again in the top of the fifth and Jenkins scored one last time at the bottom of the fifth, finishing the game 14-3.

“It was two big wins for us for sure,” Bryant said. “It was great hits and great pitching by both Lexie and Brenna with a solid defense behind them.”

These wins allowed the team to advance to the Elite Eight. A universal coin toss was held to see who would host and the toss was in Bainbridge’s favor. They will now play Heritage Catholic.

BY ETHAN REDDISH The Bearcats faced off against the Trojans at Hugh Mills Stadium in Albany Thursday night, securing an... read more