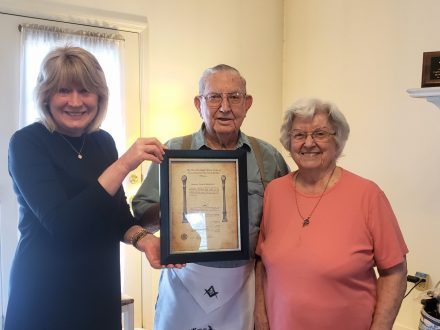 Bennie stands with his wife, Juanita and daughter, Lynn Powell holding up his certificate and wearing his 70 year apron.

Now, at age 95, Bennie Brookins can look back at a life well spent serving others.

He was recently awarded a Masonic apron and a certificate in recognition for 70 years service to the Masons. As a member of that organization he has devoted countless hours working the programs. “Masonry is good if you work it,” he says; and work it he did. He worked his way through eleven chairs to become Grand Master of the local lodge in 1983, then went on to become the Tri-county Master over Decatur, Miller and Seminole counties. Next he was the Second District Master over a larger area. At that point he had already joined the Shrine, an appendent body of Freemasonry, and served as chaplain there for two years, before becoming an Ambassador for the Shrine. In that position he was given a jeweled pin for recruiting new shrine members. He became involved in another branch of Masonry called the Scottish Rite of Freemasonry where he was Crusader Commander 12 times. He became the Venerable Master for all Scottish Rites, a position requiring being nominated and voted in by all members. He worked his way to the top of Scottish Rite offices when became a 33rd degree Mason, eligible for the White Hat.

As a Shriner, he enjoyed taking part as a clown in many parades in the area. One specific he remembers is a spring parade in Tallahassee where they followed along with a homemade train all the way down Monroe Street from North to South, giving out candy to the children along the way.

He describes the work of the Shriners as raising money to financially support the Shrine Hospitals for children. He recalls several incidents of local children he was personally involved in making sure they made it to the Shrine Hospital for free medical care. They are, of course, now grown and doing well. He continues to meet up with the parents of those children who repeatedly thank him for his assistance. “You don’t get any pay for things like that,” he explains, meaning there is no way money could ever reward a good deed. His motto in life is ‘Live for others, not self.’

Mr. Brookins recalls a good friend, Jim Harrell, who went through the Masonry chairs the same time as he did. “You have to start at the bottom and work your way to the top,” he explains. Since Harrell had a problem with driving at night, Brookins did all the driving and at some point he had expressed doubts to Harrell about continuing, but he was encouraged to keep on going. And he did. As a result he became a district deputy to the Grand Master of the State of Georgia, not once, but twice. That required him to visit all the lodges in the district each year. Brookins says he can no longer go to the meetings, but is a dues paying, lifetime member of the Scottish Rite.

His charitable works have not been confined to Masonry. He was a member of First Baptist Church of Bainbridge for 40 years, where as chairman of the building and grounds committee he was involved in the remodeling of the office and Sunday School building and oversaw the building of a new house for handicapped residents. Now, he and his wife Juanita are members of the Eldorendo Baptist Church. He and his wife also worked as Hospice volunteers – he for 17 years and she for 25.
When the local Shriners owned a lodge building on Rt. 84 East, Brookins oversaw the rentals and upkeep of that building for 25 years until it was sold to the neighboring church.

Brookins served four years in the U.S. Navy in the South Pacific during World War II, where he was on an aircraft carrier. Following his military service he went to work for Southern Bell Telephone, which became Bell South, then AT&T. He retired from there after 40 years as a maintenance technician.
Now he helps care for his wife who has lost her eyesight. He does all the cooking and gladly serves his daughter Lynn her lunch every day when she takes a break from her job with the Sheriff’s office. He says he learned his culinary skills at age 8. As the youngest child of the family, he spent a lot of time learning housekeeping from his mother.

Bennie Brookins clearly demonstrates one of the quotes he keeps in his Bible, “Our success in life is determined by our obedience to the Will of God.”

BY ETHAN REDDISH This past Tuesday, the Memorial Hospital and Manor Authority held a board meeting. Aside from discussing things... read more