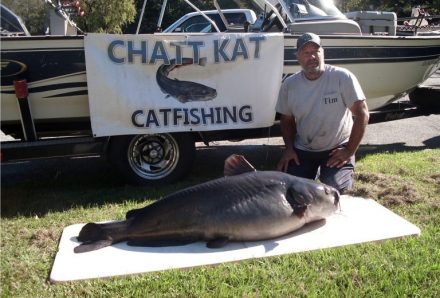 Tim Trone smiles after breaking the Georgia record with his blue catfish.

This past weekend, the Georgia state record for blue catfish was broken by Tim Trone of Havana, Fl., with the fish weighing in at 111 pounds. Trone caught the monster while fishing in the Chatt Kat fishing tournament on Lake Eufala.

According to Georgia Outdoor News, there was a bit of trouble when trying to weigh the monster fish, as it maxed out the set of 100 lb. scales initially used to weigh it. It inaccurately weighed in at 151 pounds on a set of 300 lb. scales, which would have been a world record, before finally being weighed in at Jones Country Meats.

Jones was selected as their weights are officially certified by the state.

“I was watching the Georgia-Alabama game when I got a call from Rusty Broughden,” Jerry Baggett, owner of Jones Meats said. “He(Broughden) said, ‘We may have a world-record blue catfish on our hands,’ and I thought I’d like to see that for myself… It was humongous. I’ve never seen a blue cat like that before.”

According to Baggett, the age of the monster fish is currently trying to be determined.