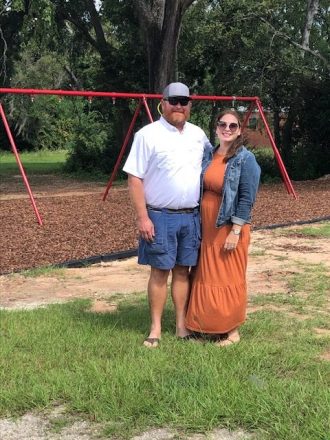 Jed and Cassi Scanlon recently donated to the Downtown Development Authority in memory of their late son, Max.

In memory of their son, Max, Jed and Cassi Scanlon of Big Pine Key, Florida made a donation to the Downtown Development Authority of Bainbridge to enhance the playground currently being constructed downtown.

The Scanlons found themselves in Bainbridge following the death of their infant son, Max, in October of 2019. Jed was familiar with the area through previous hunting trips and when they were looking for a place away from home to begin the healing process, they came to Bainbridge. The Scanlons made Bainbridge their temporary home for almost a month before heading back to south Florida. They fell in love with our town and its people.

Now, a year later they have returned here for another extended stay but before leaving to go back home, they wanted to leave a mark here to remember the place where they felt at home during tragedy and also give something back to a town who unknowingly had given so much to them.

Back in Big Pine Key, they operate a community organization who exists to support women in their area during child and infant loss aptly named Max’s Angels.

Shop with a Cop opens up applications for 2020 season