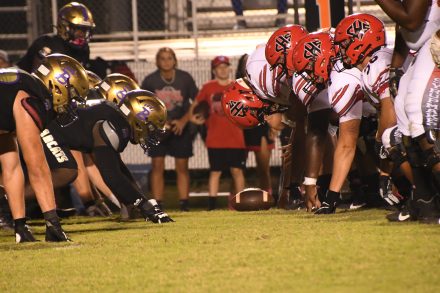 Bearcats line up ready to defend the end zone as the Syrupmakers line up for the snap.

The Bearcats faced off against the Cairo Syrupmakers on Friday night in the first region game of the season, bringing home a sweet victory, 21-0, and their fourth consecutive victory against the rival team.

The Bearcats started off strong in the first half.

Running back Rashad Broadnax made a touchdown with 3:21 left in the first quarter, after receiving the ball from Quarterback Quayde Hawkins and running it for two yards.

Nicholas Tyre then made the kick, giving the Bearcats a lead of 7-0. Broadnax made another touchdown in the second quarter with 9:41 left. He ran the ball for two yards again, with Tyre making the kick.

Coming out of halftime, both teams showed a sluggish third quarter.

However, Broadnax kicked things up again in the 4th quarter with an impressive 41-yard run with only 4:36 left on the clock.

Another highlight in the fourth quarter was an interception made by Zay Chrispen.

Broadnax had a total of 21 carries over 111 yards for the total game.

“Playing the first region game against a rival is going to be tough,” Coach Jeff Littleton said. “We did good in the first quarters, but had to put the rest together.”

Littleton was proud of Chrispen’s interception and the hard work the team is putting in.

“One thing we work on is getting all our gold helmets to the football,” he said.

The Bearcats are now preparing to face off against Dougherty County next Thursday.

“One thing we need to work on is our blocking and tackling,” Littleton reflected. “We need to get better with our fundamentals. We’re going to play Dougherty next Thursday, so that’s a short week to practice and improve.”

The Bearcats will play against Dougherty County next Thursday at Hugh Mills Stadium, with kick-off at 7:00 p.m.

Over the weekend, Climax Motorsports Park held their annual Trucks Gone Wild weekend, with activities throughout Friday and Saturday for... read more