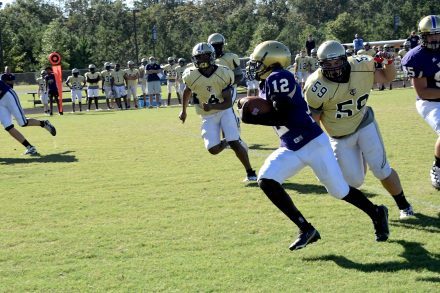 Quarterback Cam Sanders runs the ball down the field, avoiding TCC players for the touchdown.

The C-Team Bearcats faced off against Thomas County Central on Thursday, with a score of 28-0. Cam Sanders ran as quarterback, while Keenan Phillips and Javon Cox served as running backs. Coach Rohan Gaines described receiver Jamauri Williams scoring towards the end as “beautiful.” Ultimately Phillips and Williams both scored touchdowns, with Carl Bolden receiving two touchdowns.

Gaines had nothing but praise for his team.

“That’s C-Team. They’re doing a really good job… We were shooting on all cylinders,” he said. “Those young men come out to practice looking to learn new things… Those young men can and will be big players for us in the future.”

Coach Justin Palmer was also pleased with the team’s performance.

“We made a lot of improvements in a week’s time. We came out flat against Dothan last time. Made a lot of mistakes… We shut them down every step of the way this time. Cam Sanders did a good job, this whole year we’ve been able to run the ball. We’ve had three good running backs this season.”

The next C-Team game will be an away game against Dothan on Monday, October 12 at 5:30.