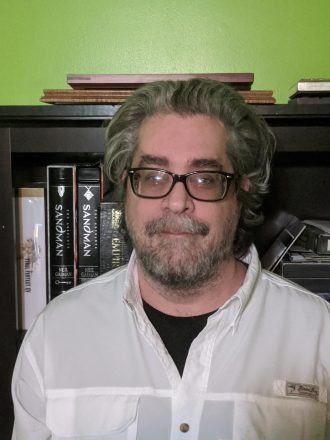 Josh Allen smiles in this photo; something he rarely found himself able to do before he began attending Samaritan Counseling Center.

How counseling changed his life

Samaritan Counseling Center recently announced they would be offering free depression screenings to promote mental health awareness during the week of October 4-10.

While the idea of counseling may seem daunting at first, it is something everyone can benefit from; not only those who suffer from depression.

Josh Allen, 46, is a client at the Samaritan Counseling Center. He has been in counseling for seven years after suffering from a psychotic break. While Allen said the psychotic break was caused by something else, his depression began to spiral out of control.

“I called the crisis hotline, and they referred me to the Samaritan Counseling Center,” Allen said. “The lady immediately scheduled me an appointment.”

Since then, Allen has been seeing the director of Samaritan Counseling, Chris Beam.

Allen said Beam’s view has helped him in ways he could never imagine.

Beam has taught Allen it is okay to have depression and to acknowledge the feelings he is feeling, but Allen still needs to get up and face the day.

“When I’m having really rough days, Beam taught me to do the opposite of what my depression is telling me to do,” Allen said.

Previously, Allen suffered from social anxiety and couldn’t go to Walmart during the day. He said he would wait until approximately 3 a.m. and then go shopping when no one was around to see him.

“Now, I do the opposite on those days,” Allen said. “I will go when everyone else is there.”

While it may not seem like much to some, Allen admits this was a huge stride for him.

“You have to let go of your personal pride and admit you need help,” Allen said.

Allen admitted when he first started at Samaritan he couldn’t even go to the mailbox he had such social anxiety, but since the first visit, going to the mailbox has become a normal occurrence, and he owes it to the counseling center.

“I encourage everyone to go, because it works,” Allen said.

Allen knows it can be a bit nerve-wracking, but said Samaritan Counseling Center felt easy and familiar.

“It was a place I could feel at home and open up,” he said.

Lastly, Allen wants people to know that feeling sad is normal, but if sadness becomes a routine thing it’s time to talk to someone.

“It’s not about feeling sad,” he said. “Sadness can sometimes be a reality and I encourage people who are feeling that sadness to seek help.”

Each year, millions of Americans face the reality of living with a mental health condition. Mental illness affects even more... read more