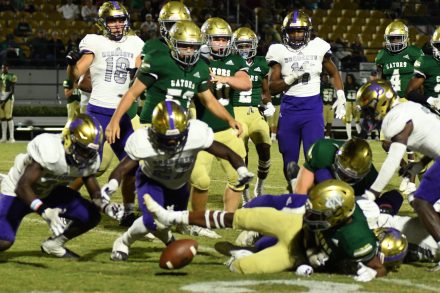 Above, a swarm of Bearcats run for the ball after a Gator fumble.

The Bainbridge Bearcats took on the undefeated Ware County Gators Friday night in an epic showdown.

The game all came down to the final seconds with the Bearcats in possession of the ball, going for first and goal, when the timer ran out and the Bearcats losing 35-30.

The Gators got the first touchdown early in the game.

Raiden Kennedy caught a 50-yard pass from quarterback, Thomas Castellanos and ran it for a touchdown with 9:54 left in the game. Henry Bates then made the kick and it was good, giving the Gators a 7-0 lead.

The Bearcats held a tough defense in the first, only allowing that one touchdown.

The Gators refused to fall behind and made another touchdown with 7:31 left in the half.

James Daniels caught a 23-yard pass from Castellanos and ran it for a touchdown. Bates made the kick and it was good.

With one minute left in the half, Bearcat kicker, Blake Fagan made a 27-yard field goal, giving the Bearcats only a five point deficit heading into halftime.

Coming out of halftime, the Bearcats were on fire. The team scored two touchdowns back to back.
Hawkins made a one-yard run with 9:30 left in the third quarter, before Fagan made the kick and it was good.

The kick gave the Bearcats the extra two points they needed to be ahead in the game 16-14.

Zion Bouie then caught a 30-yard pass from Hawkins and ran it into the end zone. Fagan made the kick and it was good.

Coming from behind, Gators running back Cah’zer McKoy caught a one-yard pass and ran it for a touchdown. Bates made the kick, making the score 21-23, with the Bearcats in the lead.

It all came down to the fourth quarter.

Castellanos threw Brandon Mills a 14-yard pass, who ran it to the end zone for the touchdown, giving the Gators back the lead. Bates made the kick, and it was good.

Castellanos only continued to add more pressure, he ran for 21 yards, scoring another touchdown with 6:40 left in the fourth quarter. Bates made the kick and it was good.

With the score 35-23, the Bearcats knew there was still a chance to win it.

Hawkins ran for one yard, scoring the final touchdown of the night. Fagan made the kick and it was good with 4:02 left.

“We left some things out there that we are going to go back and look at and think we should’ve made that play or we shouldn’t have made that mistake,” Littleton said. “In the end they outplayed us.”

However, Littleton is really proud of the effort the Bearcats put it on Friday night.

“We played really, really hard,” he said. “We never quit; we got down by two touchdowns, but we came back.”

Littleton acknowledged that the team let Castellanos make a lot of plays on them, but it was a reflection of the Gators just playing really hard.

“We are going to go back to the drawing board and look at some things during our off week and get ready for Cairo,” Littleton ended.

Lady Cats win region championship by one run against TCC

Monday night the Bainbridge Lady Cats faced off against Thomas County Central for the region championship. The competition proved that... read more