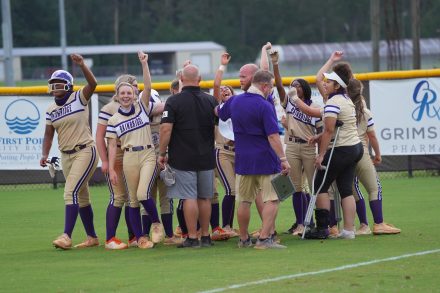 The Lady Cats smile and hold up their hands in victory on Monday night after a win against TCC.

Lady Cats win region championship by one run against TCC

Monday night the Bainbridge Lady Cats faced off against Thomas County Central for the region championship. The competition proved that both the Lady Cats and TCC were the best of the best. However, the Lady Cats outlasted TCC in the bottom of the eighth and eventually won 1-0.
The pitching was strong on both sides.

“Hats off to Central’s pitcher and their team,” Coach Christopher Bryant said. “They obviously came here to play today; they came with a purpose.”

While TCC was in it to win it, the Lady Cats had been preparing for this moment.

Bryant felt confident in the players who were coming up to bat at the bottom of the eighth and were ready for them to bring in a run.

Delbrey was first up and was walked by Barrett.

Wenda Sheffield then took Delbrey’s spot on base as a designated runner.

Halle Cannon battled through several pitches, along with Brenna Conley before Kailyn Wilson got up to bat.

“I can’t say enough about Kailyn Wilson,” Bryant said. “With bases loaded she got the squeeze down for the win and that is not an easy spot to be in, especially with that caliber of pitching.”

With Wilson’s hit, Sheffield ran home, giving the Lady Cats the one run they needed to end the game.
Wilson and Delbrey led the Lady Cats in at bats. They both had one hit.

Barrett took the loss for TCC, surrendering one run on two hits over six innings.

Bryant was thankful to everyone who came out to support the Lady Cats.

“It was a great crowd,” he said. “The atmosphere here is what it was because of our fans, and I think that contributed to our win today.”

The Lady Cats will play a few additional non- region games to end out the season, while they wait on the other regions to finish their championships.

“Tune in, because this is only the beginning,” Bryant ended, smiling.

Taking them to the pound

Seniors had a great reason to celebrate on Friday night when they beat the Thomasville Bulldogs for their Senior Night... read more