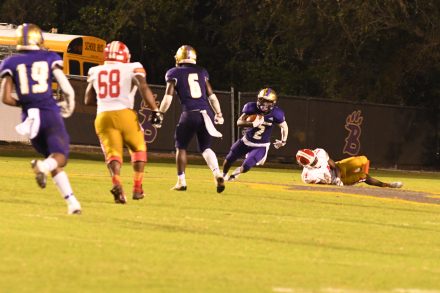 Zion Bouie took the ball on Friday night and tried to race down the field, dodging Bulldog players.

The Bearcats will travel to Waycross on Friday to play against the AAAAA Ware County Gators (3-0).
Coming off a win against the Thomasville Bulldogs on Friday night, the Bearcats are feeling confident and ready to take on a top ranked team, Coach Jeff Littleton said.

Littleton has had the Bearcats hard at work during practice. He said the team has been focusing on execution on both sides and they are preparing to play assignment football on Friday night.
Littleton knows that Ware County is offensively centered.

The Gators have a dual-threat quarterback, Thomas Castellanos and a linebacker, Michael Mincey, who has received several D1 offers.

Castellanos is also known for his rushing game; he averages 108 rushing yards per game, while Rashad Broadnax averages 70.

However, Broadnax rushed for 85 yards during Friday night’s game and is only improving during practice.
Littleton said the team plays very physically and aggressively, but the Bearcats are looking forward to the game.

The Bearcats have also been focusing on the penalties they received during Friday night’s game. Littleton said they received several false starts, due to the fact an offensive lineman would be on the line of scrimmage. Littleton said this rule is something that has been enforced during games this year, but they have been playing close attention and working on it during every practice to try and prevent players from making the same mistake twice.

With this attention to detail and hard work during practice, Littleton hopes to see a win against the Gators on Friday night.

He said he is looking forward to the game and hopes to see a good crowd on the Bearcat side.
The game will begin at 7:30 p.m. in Waycross.

The SCCA Stallions finished up their softball season at home on Monday afternoon against Miller County, where they fell short... read more