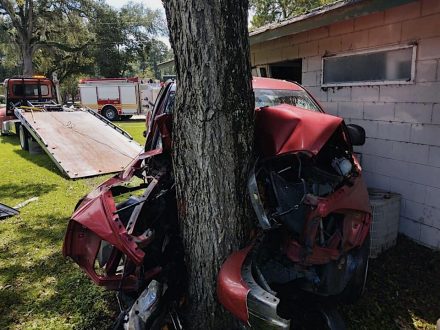 A red truck was invovled in an accident on Monday, resulting in the car becoming wrapped around a tree and the driver having to be extracted from the vehicle.

Truck crash sends one to the hospital

An unidentified man was hospitalized in an automobile accident on Monday. The crash occurred south of Johnny Skipper Road, near the Glen Oaks Motel. According to Decatur County Fire and Rescue chief Charlie McCann, the driver ran off the road, colliding head-on with a tree. The truck also partially collided with and damaged a building. Fire and Rescue had to break off the door in order to rescue the man, who was immediately driven to Tallahassee Memorial Hospital.

Georgia State Patrol was on-scene to conduct the crash investigation. GSP Trooper Davidson said he believes the driver had a medical condition that led to the crash. According to McCann, traffic was not heavier than usual. The driver’s condition is currently unknown.