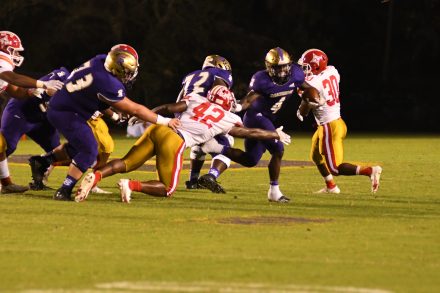 ashad Broadnax pushes away Bulldog players on both sides of him as he attempts to run it down the field.

Taking them to the pound

Seniors had a great reason to celebrate on Friday night when they beat the Thomasville Bulldogs for their Senior Night home game.

What started as a sluggish first half, ended with the Bearcats showing more power than any previous game and winning 21-7, and Head Coach Jeff Littleton couldn’t be more proud.

“We finally finished the game,” Littleton said. “We played very well defensively tonight and I’m really proud of the defense for not giving up big plays.”

Littleton was also proud of the special teams.

“Special teams did really well,” he said. “We had two punts inside the five; defense and special teams carried us in the first half.”

The first half led with Rashad Broadnax scoring a touchdown right before halftime. Broadnax had a two-yard run after receiving the ball from Quayde Hawkins. Blake Fagan kicked for the extra point and the kick was good. This gave the Bearcats the lead, heading into halftime.

Overall, Broadnax rushed for 85 yards throughout the night.

The Bearcats came out of halftime ready to make some big plays.

Hawkins threw for two touchdowns in the second half.  Zachaaeus Chrispen received an 8 yard pass from Hawkins and ran it into the end zone. Fagan then made the kick, with it being good, giving the Bearcats the lead 14-0

Finally, the Bulldogs scored a touchdown, putting the pressure back on the Bearcats to finish the game.

“We tackled well and we got after the quarterback really well,” he said.

Bulldog Quarterback Ronnie Baker threw a pass and was intercepted by Zion Bouie.

With the Bearcats back in possession, Caleb Lewis received the ball twice and ran for a touchdown. Fagan then made the kick, finishing the night with a score of 21-7.

Littleton was proud of Fagan’s efforts throughout the night and Braxton Johnson, who received four times for 31 yards and passed for 28 yards. He hopes to only see them get better in next week’s away game.

“We have a few issues to still work through, “Littleton finished. We have a tough Ware County team next week so we have to get better in practice.”

The Bearcats will face off against Ware County next Friday night in Waycross at 7:30 p.m.

This past Monday, September 21, a pallet of peanut butter left the John B. Sanfilippo & Son, Inc. plant bound... read more