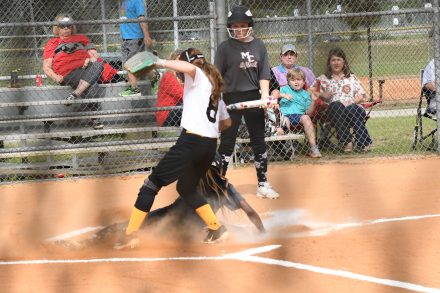 Pitcher Logan Thompson runs to home plate to try and tag out a Miller County player who was trying to score.

The SCCA Stallions finished up their softball season at home on Monday afternoon against Miller County, where they fell short 15-2.

While the Stallions may have lost, Coach Anna Barber said there were some bright moments throughout the game.

Loghan Thompson and Morgan Rich alternated pitching and both pitched one strikeout.

Rich also got the opportunity to score when she was walked during the third inning, after fellow teammate, Kelsie Fillingame was walked in the second inning and scored.

These two runs, along with both pitchers striking out a player are only some of the many accomplishments the team has made this season.

“The first season went very well,” Barber said. “We didn’t have a lot of practice due to COVID-19, but we jumped right in.”

Throughout the season, the team showed a lot of improvement, Barber said. She saw the girls gradually improve at hitting, pitching and fielding.

“They did so well staying positive,” she said. “I’m proud of them for having the confidence that they could go up against other teams.”

Barber said the scores didn’t matter to the girls, they were just glad to be out there. She said several times throughout the season they expressed their thankfulness to be a part of the inaugural softball season.

“They have already said they’re ready to come back even better next year,” Barber said.

Barber said since the program began, several girls at school have shown interest and told her they are definitely trying out next year.

Barber is thankful she had the opportunity to coach the girls for the first year and looks forward to next season and improving during that time.