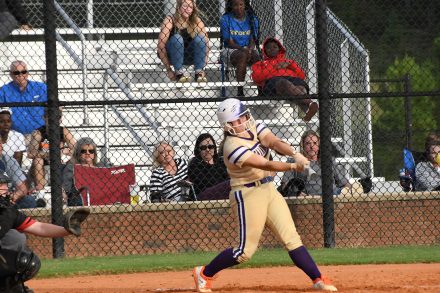 The Lady Cats softball team was on fire Thursday in their game against Thomas County Central. With the pitching prowess of Lexie Delbrey and a team batting effort, the Lady Cats won 8-1. They then took the home mound on Monday where they shutout region opponent, Cairo 8-0.

The Lady Cats opened up scoring in the first inning on Thursday, when Delbrey singled on an 0-1 count, scoring one run.

Two additional runs were scored in the third inning and fifth inning, before the Lady Cats pulled away in the sixth inning.

Halle Cannon hit a long home run in the fifth inning, while Delbrey hit a grand slam with bases loaded in the sixth.

Delbrey led the team to victory on the mound. She allowed five hits and one run over seven innings. She struck out ten and walked one.

The 12 hits were made by Cannon, Delbrey, Abbigayle Hamilton, Kailyn Wilson and Keyleigh Brinson. Cannon led in at bats, going three for three.

“It was a big team win,” Coach Christopher Bryant said. “Lexie dominated in the circle, but everyone contributed.”

Monday was an even bigger team win, when Delbrey threw a no-hitter against Cairo.

The Lady Cats brought in one run during the second inning, before collecting two more runs in the fourth inning and one run in the fifth. The team pulled away for good in the sixth inning when they scored four runs.

The rally was led by a groundout by Delbrey and a double from Brenna Conley.

The Lady Cats totaled 11 hits during the game and were led by Cannon and Brinson, who each managed three hits.

Delbrey earned the win for Bainbridge. She went six innings, allowing zero hits and zero runs, while striking out 17.

Cairo’s Baggett took the loss. She allowed 11 hits and eight runs over five innings. She struck out four and walked zero.

The Lady Cats will face off against Cairo again on Thursday at Cairo. The game begins at 5:30 p.m.

Cougars take the field for first time against Crisp Academy

The Grace Christian Academy Cougars had their first ever football game on Friday night against Crisp Academy. While the Cougars... read more