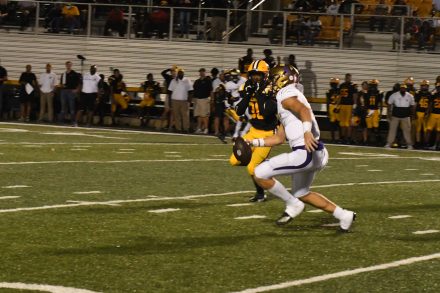 Quarterback Quayde Hawkins attempted to run the ball during last Friday’s game against Valdosta. He will be recognized during Friday’s Senior Night at home.

The Bearcats have been hard at work since their loss against Valdosta on Friday night. Now, they are ready for a win on their home turf against Thomasville during Senior Night on Friday.

The AA Thomasville Bulldogs (2-1) faced off against region opponent Cairo on Friday, where the Bulldogs won 30-7.

Coach Jeff Littleton said the Bearcats will have their hands full Friday night, but they are ready.

However, Littleton said the Bearcats are looking good.

“We have a good attitude going into Friday night’s game,” Littleton said. “The team is mad about our 2-0 record and they’re ready for a win.”

Littleton said players have been stepping up and holding team meetings, while making sure everyone is held accountable for their actions.

Littleton believes the atmosphere for Friday night’s game will pump up the players even more with it being senior night and a home game.

Littleton said the senior night recognition will begin prior to the game at 6:45 and last until 7 p.m.

The game will then begin at 7:30 p.m. at Centennial Field, where the Bearcats are hoping to bring home the win.