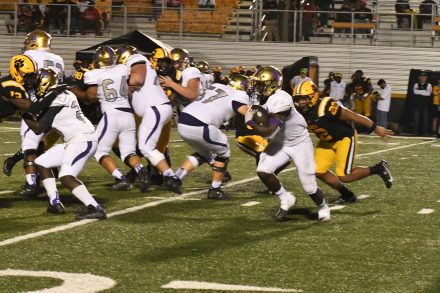 Rashad Broadnax runs down field on Friday night as Wildcat players try to catch him.

The Bainbridge Bearcats traveled to Valdosta on Friday night to face off against the Wildcats. Despite the amount of heart and moments of tough defense the Bearcats put up, the Wildcats ultimately won 45-7.

Head Coach Jeff Littleton was proud of the effort his team put in, though.

“We had some good things tonight,” he said. “We just got outplayed bottom line.”

The game began with the Bearcats winning the toss and deferring.

They then held a strong defense throughout the entire first quarter with the Wildcats only scoring one field goal, making the score 3-0, leading into the second quarter.

During the second quarter, the Bearcats made their first touchdown. Quarterback Quayde Hawkins threw a pass for 18 yards to Braxton Johnson, who ran it to the end zone.

The Wildcats refused to lose, though and scored 28 points during the second quarter. Going into halftime, they led 31-7.

Coming back onto the field, the Bearcats held a tight defense again, but it wasn’t enough to stop the Wildcats, who scored one touchdown in the third quarter and another touchdown in the fourth quarter, ending the game 45-7.

“We’ve just got to work harder and move the ball on offense,” Littleton said. “We’ve got to put our nose to the grindstone and not make excuses.”

Littleton said there were some players who stood out tonight, now he just wants to get them coached up for next Friday’s senior night game against Thomasville.

Some of the standouts in Friday’s game were Rashad Broadnax who had 11 carries for 63 yards, Travious Freeman who had 3 carries for 4 yards and on the receiving end Caleb Lewis received three times for 38 yards, Tahari Tate received twice for 23 yards and Johnson once for 18 yards and a touchdown.

Littleton looks for the stats to only improve during next Friday’s game, which will be at Centennial Field at 7:30.

Mayo Livingston was known for his caring personality, his love of history and his business acumen, especially in agricultural related... read more