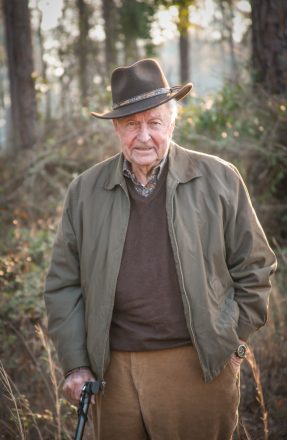 Mayo Livingston was known for his caring personality, his love of history and his business acumen, especially in agricultural related fields.

His businesses included the operation of the Cyrene Turpentine Company and vast acres of timber farming for which he was named the Agricultural Man of the Year for Decatur County in November 2015.

Mayo loved history and telling the stories of Decatur County. Probably his biggest project involved the videotaping of the WW II veterans of Decatur County. Those tapes are available for viewing at the Gilbert H. Gragg Library in Bainbridge. He also told his stories in a column he wrote for The Post Searchlight for a number of years.

Boy Scouting was another priority for Mayo, who helped organize and lead Troop 502 in Bainbridge.

Without a doubt, one of his most caring ventures was to initiate the community Thanksgiving Dinner project begun in in the 1980s. With help from the management and cooks at Winn Dixie and a growing group of volunteers who met at the Methodist Church early every Thanksgiving morning, hundreds of plates of food were prepared and delivered to shut-ins, those who lived alone, or most anyone who needed the love of a good Thanksgiving dinner. This project continues to be active each year thanks to the continuing oversight provided by his son Joe.

Mayo made many friends through the years. Comments from a few of them are included in this article.

Dr. Jack and Joyce Leverett recall when their son Jay was making dental mission trips that Mayo was so proud of him. Jay invited him to go along on the next one, and he did. “Mayo worked as Jay’s dental assistant in Honduras for a week,” exclaims Joyce.

Mayo was also one of the Boy Scout leaders for Rotary Troop 502 for several years, and during the time their son Jay was in scouting. She said that troop produced many Eagle Scouts, including Jay. Jack remembers many pheasant hunting trips made with Mayo, as well as the annual trips to the islands. They described him as a very well-rounded individual.

Luther Conyers and his brothers were all best childhood friends with Mayo and remained best friends through the years. “We may have drifted apart as we matured and went away to school, but as we grew older we retained our relationship and it grew and grew and grew.” Luther said he was at Mayo’s house as recently as this past Sunday afternoon and tried to communicate, but Mayo was only able to communicate with his eyes. “We were in Rotary together for many years, and I may have become a Rotary member due to Mayo’s influence,” he added.

Dr. John Reynolds tells how Mayo’s father and his great-grandfather were in the turpentine business together in Cyrene for years, followed by Mayo and Reuben Reynolds Jr. continuing to spearhead the business. Now, all the Reynolds and Livingstons carry on the tradition. “From my earliest days Mayo was a second father to me. My brothers and I all worked for Mayo on the farm in the summers. He helped raise us with love and respect for the land and the people and traditions of this area.” Reynolds added it was Mayo’s understanding of the native longleaf ecosystem that preserved the timber up until Hurricane Michael. Reynolds shared a “turpentine story” he said Mayo liked to tell. “On December 6, 1941, he had a load of turpentine marked for Nagasaki, Japan leaving on a train from Cyrene for Savannah, Ga.” He said Mayo always wondered what became of that shipment once Japan bombed Pearl Harbor.

Dana Bryant worked hand-in-hand with Mayo on several projects over the years. Portions of what she posted on his 90th birthday in December are as follows, “This man right here is a legend in my book. He never said no when I asked him to read to my students, share history (esp. World War II) or any other idea I cooked up. We spent several years from September until Thanksgiving Day preparing lists, making calls and visits, scheduling, ordering and serving our people. Some days he stopped by my office just to chat and let me pick his brain. I haven’t known him well for all my life but certainly half of it. He has given me much to chuckle about, mull over and even a few things to test. ….Mayo had an uncanny way of knowing when I needed to hear from him. He taught me how important the big picture is and to not sweat small stuff. He recruited me to help him organize Thanksgiving meal delivery and serve with Habitat for Humanity. He loved to stand back and know how he helped people but he NEVER wanted ANYONE to know it was him….He loved Decatur  County and I loved to hear him talk about it. He may have been a forester by trade, but he was a historian at heart.”

A full obituary written by Joe Livingston appears on page five of The Post Searchlight. It provides much insight into the personality and counts the many accomplishments of Mayo.

Time and space have prevented contacting more of Mayo’s many friends in order to gather their tributes and memories. Undoubtedly, their stories about his life itself could become a book.

The Bearcats kicked off against the Coffee County Trojans on Friday night, where they came up short in the second... read more