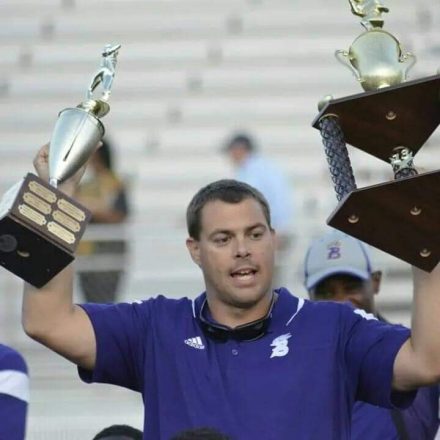 All of the Bainbridge community, especially members of the Decatur County Schools System and its Athletic Department, were shocked and saddened last week by the untimely death of Heith Maxwell, Principal of Bainbridge Middle School.

Maxwell was only 41 years old, and he leaves a wife, Tiffany and three young daughters, Jaycee, Caroline and Charlieann. Other survivors are his mother Louise Maxwell and her husband, Gerry; his in-laws Kent and Linda Culverson Croom and his siblings, Jennifer Ard and Eric Maxwell.

Many persons posted heartfelt tributes on Facebook throughout the week.

Among those were: Mike Albritton who told of the great times they had playing soccer together at the YMCA while Heith was still in high school and how he met his wife there. “Heith succeeded at everything he did. Whether playing sports, coaching sports, being a school teacher, being a husband, being a father….He was driven and determined.” He commented on the impact he made at the middle school after becoming the principal last year.

Lauren Harrell described her experience playing soccer on the boys’ team along with Maxwell after she moved to Bainbridge in 1996. She had been playing since she was six years old and was disappointed to learn Bainbridge only had a JV Girls’ soccer team. Heith Maxwell was a member of the team that welcomed her to the game and she described him as her biggest protector and constant source of laughter. She posted a photo of the team showing both herself and Maxwell.

A drive-in funeral was held on Saturday, September 12, in the parking lot of the Bainbridge High School, where Rev. Stephen Webb of Bainbridge First Presbyterian Church officiated. The service was broadcast by radio to the cars that had assembled.

The service began at 10 a.m. and lasted two hours as speakers paid tribute with personal remembrances and expressions of solace.

Heith was a faithful member of First Presbyterian Church where he and his family have attended for several years. Rev. Webb briefly described the service held on Saturday, saying there were five persons who spoke and related their personal experiences with Heith. Among them was a current student who had experienced some difficult times in her life. She testified as to how Principal Maxwell had helped her by telling her, “Broken crayons can color too.”

Friday night’s football game with Coffee County featured a tribute from the Bearcats when the stadium held a moment of silence, while posting Maxwell’s picture on the scoreboard. Cheerleaders then presented the banner for the players to run through that had Maxwell’s jersey number surrounded by angel wings with four Bearcat paws, representing all of his different roles: father, husband, educator and mentor. Players then ran through and played the game for Coach Maxwell.

Bainbridge Church of God served a spaghetti dinner to the Bearcats on Friday, prior to their first home game against... read more