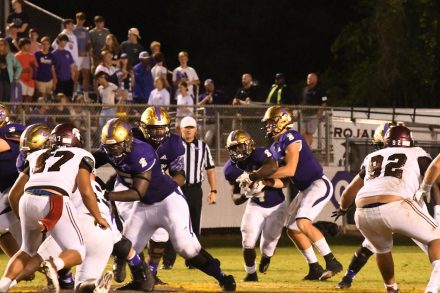 During Friday night’s game, Quayde Hawkins passed it off to Rashad Broadnax in hopes of running it for a touchdown.

The Bainbridge Bearcats will take a road trip on Friday night to face off against the AAAAAA Valdosta Wildcats (1-0).

The Wildcats played Bearcat rival, Warner Robins last Friday night, where they won 28-25. However, Coach Jeff Littleton isn’t worried; he said the Bearcats are up for the challenge.

Since then, Littleton said they have been working on their run game.

“We had some trouble with our run/pass options on Friday and we had some discipline problems on defense, but we’ve been working though that in practice,” he said.

Littleton noted that the Wildcats are a pass heavy team and that is something they are going to have to really look out for on the field. He also knows the Wildcats and their coach, Rush Propst are a heavily respected team, but Littleton wants the Bearcats to play against the best of the best.

Littleton acknowledges it will be a challenge going into Wildcat territory.

While it may be a challenge, the team leaders stack up as an even match against the Bearcats.

Tahari Tate has an average of 19 tackles per game, while Wildcats #8, Jaylin Alderman usually has 14.

Littleton and the team is ready for the matchup.

The game will begin at 8 p.m. in Valdosta. The field is located at 4590 Inner Perimeter Road in Valdosta, Ga.

The only word to describe the Bearcats’ wide receivers this year is deep, according to Coach Blake Cecil. “I feel... read more