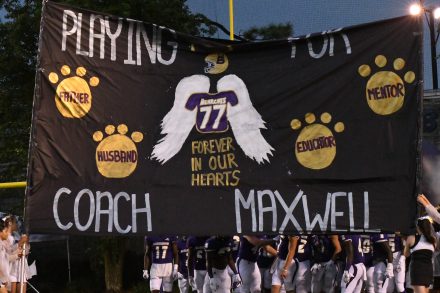 The Bearcats kicked off against the Coffee County Trojans on Friday night, where they came up short in the second half and lost 16-31.

The Trojans took an early lead, scoring the first touchdown.

Maurice Turner caught an 84-yard pass from AJ Wilkerson. Noah Saylor then made the kick, making the score 7-0 with 5:56 left in the first.

Feeling the heat, Bainbridge finally got on the scoreboard with 6:23 left. The Trojans’ AJ Franklin tackled in the endzone for a safety, giving the Bearcats two points.

As the clock was winding down in the second, Tahari Tate caught a two-yard pass from quarterback, Quayde Hawkins and ran in for a touchdown. Nicholas Tyre made the kick, giving the Bearcats a score of 9-10 with 2:23 left.

With 1:29 left before halftime, Zion Bouie caught a 35-yard interception and ran it down to the goal line. Blake Fagan then made the kick, giving the Bearcats the lead of 16-10.

Coming back from halftime, the Bearcats took a slow start; neither team scored any points in the third quarter.

The game ended with Wikerson making a 9-yard run with 2:41 left and Saylor’s kick being good.

Littleton acknowledged the team had some issues in the second half of the game with cramping, penalties and an ejection.

“Undisciplined selfish acts will get you beat,” he said.

Littleton wants to take this first game as an opportunity to learn, though.

“We had some big plays,” Littleton said. “We had some good running and throwing, just not enough to beat a team like that.”

Littleton said they the team has some things to focus on offensively, especially blocking with their eyes up and seeing people locked up.

“We weren’t executing in really any phase of the game,” he said. “We have a lot of work to do.”

Littleton wants to focus on technique this week and getting in shape prior to their away game against Valdosta next Friday night.

MainStreet Family Care cut the ribbon to their new clinic on Friday afternoon, while surrounded by their mascot, Dr. Wags,... read more