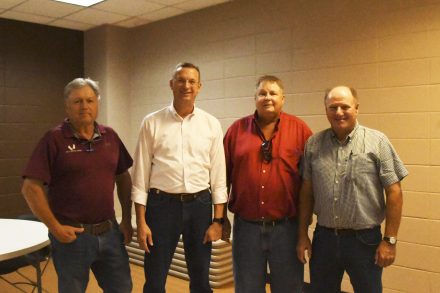 Current Congressman and Senator hopeful, Doug Collins stopped in Bainbridge on Thursday afternoon for a meet and greet at the Cloud Livestock Facility, where he was joined by his wife and fellow supporters.

Collins said most people have gotten to know him through television, but Thursday he wanted to come down to Southwest Georgia, shake some hands and ask for their votes.

While Collins wanted people to get to know him on a personal level, he also wanted to get to know his voters. In order to accomplish this, Andy Bell took Collins to tour some local farms, so Collins could talk to farmers about what they do and what their concerns and needs are.

“If you don’t know what people’s concerns are, then it’s hard to represent them in D.C.,” he said.

Collins is ready to see a Senator be a force in agriculture, but he also is prepared to tie the role agriculture plays to the rest of the state.

“I’m ready for One Georgia to not just be a slogan,” he said. “I’m ready to really see how we can integrate our rural communities into the rest of the state.”

He realizes not everyone wants to go into agriculture or into business, so he said he wants to find a way to integrate options in a way that feeds the passion of the people.

Collins then discussed that while in Congress, he’s been defending the President and working on criminal justice reform.

He said the reason he decided to run for this seat was because of his three children; he realizes they are the future of this country and if he doesn’t advocate for them, they’ll never have what they need in the future.

Collins addressed some of the rumors that have been spread about him, particularly the rumor that he is not a Conservative.

One of the rumors that Collins said has particularly bothered him is that he is not pro life.

Collins’ eldest daughter was born with Spina bifida, he said.

“She is paralyzed from the waist down,” Collins said. “But, I am the proud father of a disabled child, except in my eyes she’s not disabled; she just walks a little differently than you and I.”

Collins said during his wife’s pregnancy, several people suggested they terminate due to the Spina bifida, however he and his wife said they reminded those people that God gave them this child and He could take it away if He wanted, but they would not.

“I’ve been the most prominent pro-life person in the State House,” he said.

Upon clearing up the rumors, Collins went on to say that one of the things he is focused on is rural broadband. Collins addressed how the pandemic proved what an issue Internet access in rural communities is.

“A few miles down the road shouldn’t be the difference between a dream and a divide,” he said.

Collins wants to incentivize companies to put their wires or fiber optic networks in rural communities, so everyone can have the service and communities can work on becoming One Georgia.

Finally, Collins discussed how young individuals can get involved in farming if they don’t have a farm being passed down to them.

Collins said these are only a few of the issues he hopes to address if elected to the appointed Senate seat.