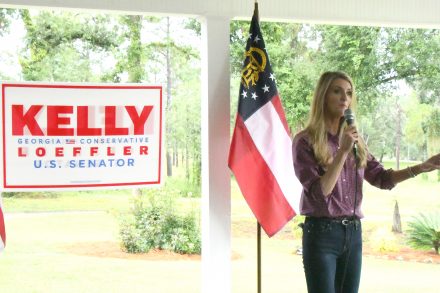 Kelly Loeffler speaks at Covey Rise Plantation on Monday afternoon to residents from across Southwest Georgia.

Conservative businesswoman and U.S. Senate hopeful, Kelly Leoffler visited Covey Rise Plantation on Monday, where she spoke to Decatur County and other surrounding county residents on her platform.

Loeffler was introduced by Senator Dean Burke, who applauded Loeffler’s hard work for the citizens of Georgia.

“She has absolutely no reason she needs to do this job,” Burke said. “I feel like I got into politics for a similar reason, I didn’t need the Georgia Senate job, but I felt like I had something to offer and I think that’s why Kelly is in it too.”

Loeffler thanked Burke for the warm welcome before addressing the crowd.

Loeffler said Washington was definitely a calling she had, but along the way she’s been attacked for her success. However, she hasn’t let it deter her. Loeffler explained she’s been in Washington for approximately seven and a half months and has proven to the critics that she didn’t need to be there long to accomplish her goals.

Loeffler said her first act of business going into the Senate was voting against the decision to impeach President Trump. Following that, she said she then got down to the real work that needed to be done for the state of Georgia.

One of Loeffler’s top focuses for the residents of Georgia and throughout the U.S. is to put an end to abortion on demand.

“It’s immoral and it’s wrong,” she said. “I’ve introduced legislation and I’ve voted on the Senate floor to put an end to these terrible laws that promote abortion on demand.”

Loeffler recently introduced a bill, known as the Women’s Right to Know, which is a pro-life bill, while also supporting dozens of other pro- life agendas she said.

“I’ll continue to be that voice for the unborn,” she told the crowd.

Loeffler then talked about some of her additional focuses, which include the right to bear arms.

Loeffler explained to the crowd she introduced the Gun Owner’s Privacy Act, otherwise knows as the GOP Act, which prevents a Federal Database of lawful gun owners from being created.

Loeffler said she has introduced a piece of legislation that ends gang violence that is brought across the border. The legislation will deport criminals who engage in gang activity and gang- related violence. In addition to that, she told the crowd she believes the United States needs to hold China accountable for not only lying about the seriousness of the virus, but the intellectual property they stole as well.

Loeffler has started an initiative to bring manufacturing back to the United States in hopes that residents will no longer have to rely on China to produce bulk materials, proving that the United States does not have to do business with them.

Loeffler ended her stop at the Covey Rise Plantation by thanking the men and women in uniform and telling everyone in attendance she supports the police, and votes against the defunding of them.

Residents in attendance were impressed with Loeffler’s promises and said she definitely held their attention.

Jay Wells was one in attendance and said it was a great crowd, despite the nasty weather.

“There was a good crowd from Decatur County and about twice as many people as I expected at the event,” he said.

Wells said following the event, he was reassured that Loeffler has the most Conservative record in the Senate and has a 100% voting match with Trump, while she held her seat.

For more information on Loeffler and her platform visit www.KellyforSenate.com.