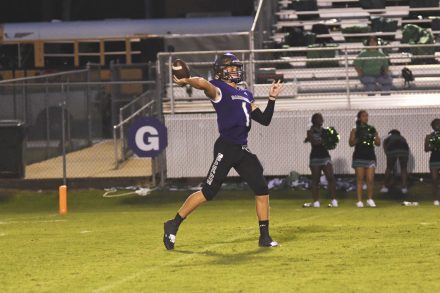 Senior quarterback Quayde Hawkins will lead the offense for the Bearcats in 2020 after consistent improvement this summer.

Offensive coordinator and Quarterbacks coach Mike Harville had nothing but great things to say about the way Senior Quarterback, Quayde Hawkins and backup quarterback, Bo Smith have been practicing over the summer.

Hawkins is a returning two-year starter, and Harville said he believes his maturity in the position along with being a senior and being in the offense for the past three years will make him a great leader this season.

Smith is an incoming sophomore and Harville believes he has a lot of potential.

“Last week to this week he’s showing a lot of promise and coming around and making a lot of plays for us,” Harville said.

Harville has been working with the players on quick, decision-making.

“We want to make sure we put the ball in a position for the receivers to make a play; that’s the biggest thing,” he said.

Harville realizes they are in a different classification this year, but said he hasn’t looked too much into the other teams; he encourages all players to look at the next game as their biggest competition. However, he looks forward to the games against Cairo and Thomas County, because they are special to Bainbridge.

While Harville puts on a serious face at practice and during games, he said he truly loves working with the players on their technique, but also relating the game of football back to every day life.

“There is a lot of adversity players have to face out here and Coach Littleton does a great job in expressing the times when we have adversity and being able to overcome that,” he said. “Things don’t always go the best on game night, but you have to get back up and dust yourself off and give 100 percent the next time.”

Harville said where he finds the most joy is watching his players turn into young men and apply what they learn on the field into their every day life.

However, Harville said right now he, along with the players, are chomping at the bit to get out on the field and show what they’ve been practicing.

“We want to get out there and see where all this hard work has taken us,” he said. “We want to be the show on Friday night.”

The Bearcats will be the show on Friday, September 11 at home against Coffee County. The game will kickoff at 7:30 p.m.