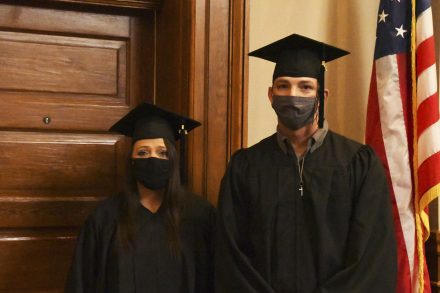 Wednesday morning the South Georgia Judicial Circuit Accountability Court graduated their first two participants, Amanda Trawick and Austin Ellis, honoring their hard work as they continue on their journey of wellness and sobriety.

Senior Judge, J. Richard Porter welcomed the graduates into the Courtroom and recognized them before providing them with a traditional Commencement speech.

Porter titled his speech “I did and I can,” meaning that the students have finished the program and now they can go out into the world and do whatever they set their mind to.

Porter told the graduates the story of his friend, who lives in Cairo. Porter explained his friend had a tough life; his mother died at six-years-old and was placed into a group home. Porter said his friend ran away several times, but at some point in time when he was in school, he ran into a teacher, who saw his potential.

Porter said the teacher adopted him and encouraged him to graduate from high school, college and enter the Marines.

“If he can do this, you can also,” Porter told the graduates. “Not everyone is born with the same benefits.”

Porter then told a similar story that he read in a newspaper clipping, however this man had a different background. The young man Porter told them about was a star athlete with a promising career ahead of him, however he wound up in a maximum-security prison, Porter said.

Porter told the graduates the man believed he was at the end of the line, but he received a letter in prison from his junior high school teacher, who told him that he would get out and could deliver a powerful message to others.

Porter read that the man did change and explained to the graduates the man had to admit to his shortcomings and take responsibility for his actions and apologize to those he had wronged.

“I tell you those two stories to say that you can overcome backgrounds and what you’ve done,” Porter explained. “You need to strive to improve every day.”

Porter told them he works to improve, and still learns things daily, while still continuing his education each year.

“As long as you continue to work hard, you will succeed,” he said, finishing his speech.

Porter then called Trawick and Ellis to receive their certificate of completion from the program.

Upon getting their certificates, therapist, Tequila Talley spoke on their accomplishments the past few months.

“Y’all demonstrated to me that y’all are able to do it,” Talley said. “It shows that y’all are focused and stuck to it, continue to use your social skills and succession plans, keep the motivation that you’ve shown you have and go forward.”

Talley reminded the graduates that they now have a team behind them, who is there for them at any time. She told them that as they enter the world, do not let others downplay them because of their past, but never forget the work they have put in.

As Talley finished her speech, Trawick and Ellis were encouraged to speak on their experiences.

Trawick thanked everyone who helped her complete the program. She explained she has had many accomplishments since finishing the program, but her biggest accomplishment was regaining full custody of her daughter.

Ellis said he now takes it one day at a time and believes this is just the beginning of what’s to come.

Porter thanked Trawick and Ellis for their words and announced them as graduates, before their families gathered with them for pictures and a cupcake treat.