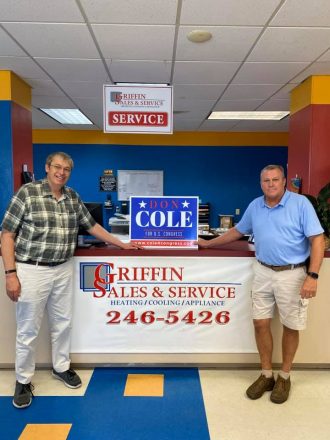 Candidate Don Cole, left, stopped in at Griffin Sales and Services to show his support and speak with them.

Congressional candidate, Don Cole paid a visit to Bainbridge on Tuesday, where he spoke on some of the issues facing rural Georgia and how he plans to use his background to impact Georgia’s 2nd District.

Cole was born in Barnesville, Georgia and grew up in Bonaire, Georgia. He enrolled in Gordon Military College, where he graduated and enlisted in the US Army. Following an honorable discharge, Cole returned to school and received a Bachelor’s degree and later Master of Public Administration.

Cole continued to further his education and later attended Southwestern Baptist Theological Seminary, where he earned a Master of Divinity Degree.

During his time in school, Cole placed great value in the opportunities he had been given and the eye-opening perspectives that the various locations he enlisted in had provided him.

This prompted Cole to promote public policy that reflected his values of limited government and individual freedom.

He became active in the Republican Party in 2000 and was appointed by Governor Sonny Perdue to the Georgia Department of Human Resources. In his role there, Cole advocated for individuals with developmental disabilities and was eventually awarded the National Easter Seals Advocacy Award.

Following several additional roles working with the Board of Behavioral Health, Cole eventually became Perdue’s primary speechwriter after Perdue was named the Secretary of Agriculture.

During this time, Cole became very involved in the issues that mattered to farmers. He said he helped with the implementation of laws that farmers wanted to see enacted.

While writing for Perdue, Cole continued to work as a pastor and teach on Christian ideals, which reflects one of the main values in his campaign- the right to life.

“Organizations like Planned Parenthood are totally in contrast with what I hear and see in worshipping,” Cole said.  “There is a connection in what we believe in our deeply held values and public policy.”

Cole believes in defending the life of the unborn and he intends to stand up for the life of the child. Cole referenced the Fetal Pain Abortion Bill and believes there should be more education and studies done on the pain caused to the unborn.

“This is a foundational issue here in the 2nd District,” he said.

Cole continued to discuss further issues that are held close to Christian Conservatives.

He believes the government has used past laws to reward single mothers, while penalizing marriage.

“The policies of the past that have rewarded and incentivized women having children out of wedlock is an attack on the foundation of family, which is the basic organization of society,” Cole said. “It is under assault and has been under assault, and our culture can look today and see the damage it has caused because of that.”

While these issues are close to Cole’s heart, his number one focus is economic development.

Cole knows every farmer is using technology in some way and wants this service to be accessible to them for business and trade purposes.

Placing his efforts into agriculture, rural broadband, the economy and protecting traditional values, Cole hopes to take the seat for the 2nd District.

To learn more about him, visit cole4congress.com.