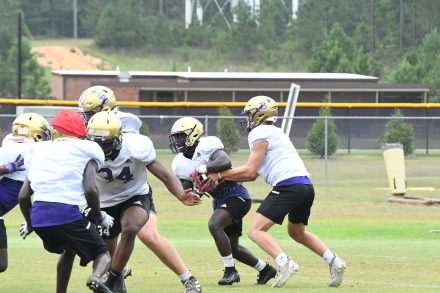 Quarterback, Quayde Hawkins passes it off to Rashad Broadnax, the starting running back during practice this week.

Power in the run game

Bainbridge Bearcats running backs coach Larry Cosby has some aces up his sleeve this season.

Cosby has three time returning starter, Rashad Broadnax on his side, along with backup Latrevian Colbert.

“Running back wise we are pretty stacked,” Cosby said.

Additionally Cosby has senior Courtney Thomas who will fill in at times.

Cosby said the team has been really focusing on taking care of the ball.

“We are trying to eliminate the fumbles and turnovers we had a couple of years prior to,” he said.

Cosby said he doesn’t know what the rest of the region looks like running backs wise, but his hope is that the Bearcats have the best ones in the region.

Cosby is really enjoying his time working with the running backs. He explained he played running back in 1986, and to come back and work with the team now is a plus for him.

Cosby isn’t worried about the future after the seniors leave. He said they have many freshmen eager to play running back, which have already played on JV.

“We are still going to be pretty good in that area,” he said.

Cosby thanks the group he is currently coaching for making his job fun.

“It’s great working with a group who love to work everyday and make my job fun; it’s great to be a Bearcat,” Cosby smiled.

The team is preparing to host Mitchell County at home on September 4 at 7:30 p.m.

The Bainbridge High School Lady Cats softball team could be found hard at work on Tuesday afternoon in preparation for... read more