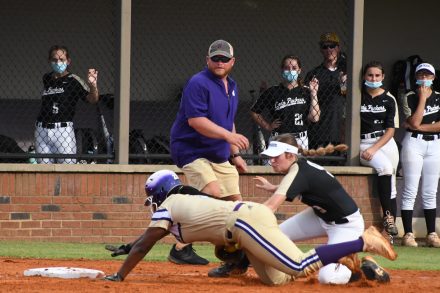 Taralyn Brown slides into third base, where a Colquitt County narrowly tags her out. Brown made it just in time as the quick, designated player.

Thursday afternoon the Lady Cats softball team took to the Bearcat diamond for their first home game, where they narrowly lost in the ninth inning to Colquitt County 3-2.

Coach Christopher Bryant was extremely proud of his team.

“We didn’t get the results we wanted, but any time you take a 7A school to nine innings; it’s an improvement,” he said.

Bryant said the team worked together and a lot of the younger teammates stepped up.

“We stayed up the whole time until the last run in the ninth inning,” Hamilton said.

The team had eight hits throughout the game, with Haylee Nix bringing in the run.

Lexie Delbrey pitched, where she struck out 16 players.

Brenna Conley then stepped up to the mound after 7 innings, where Bryant said she also did a great job.

The team will play again on Tuesday, August 18, at Dougherty High.

Power in the run game