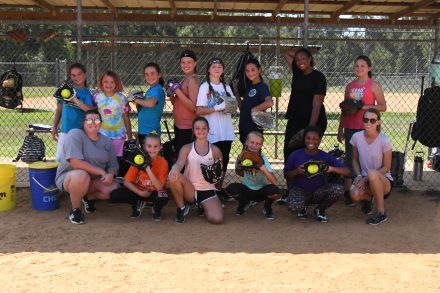 The team is led by Coach Anna Barber, who has a background in softball and said she was definitely interested in creating a team.

Barber said SCCA had always intended to have sports, but in order to begin the program they first polled the students on what their top choices would be, and softball led the pack.

Most of the girls are very new to the game, but Barber said they have been extremely hard workers.

“All but one are fifth and six graders,” she said. “I know they’re a little nervous because we are playing against seventh and eighth graders, but their talent is really getting up there.”

Because it’s a JV team, Barber said they don’t have a specific district they will be playing. However, they have games lined up against area schools such as, Patula Charter Academy, Westwood, Whigham, Southwest Georgia Stem School and Miller County.

Sixth grader, Loghan Thompson is one of the players on the team, who said she is really excited about starting the team.

“I’ve been looking forward to it since the beginning,” she said.

Thompson said she doesn’t know much about the other teams, but she’s just looking forward to getting out there and playing real games.

Thompson doesn’t know her position yet, but is hoping to play shortstop. She said that is where she is best. Thompson previously played when she was 7-years-old, but said now she is practicing hitting with her dad in the back yard.

The hitting practice is paying off.

“My favorite part is hitting, because I usually hit it to the fence,” Thompson said.

Another member of the team is sixth grader, Kelsie Fillingame.

Fillingame is hoping to be catcher and is very excited to be a part of the team.

She said she has been practicing since last year in anticipation for the season.

Barber is excited to work with the girls and continue developing their skillset and love for the game.

Their first game will be August 10, at Pataula Charter Academy at 4 p.m.