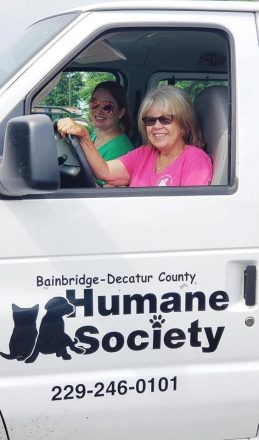 Leaders of the Bainbridge-Decatur County Humane Society, Director Ashley White and Board President, Denny Nichols, at the wheel of the van, are on their way to make a delivery.

The local shelter is right in there with some of the “BIG dogs.” Included in the listing are shelters in larger metropolitan areas, such as Boston, Mass., Austin, Texas, DeKalb County in Atlanta, others in San Francisco, Los Angeles, Orlando, Fla. to name a few.

Although the local shelter is small, crowded and in need of new facilities, the staff made up of 7 full-time workers and one part-time is dedicated to providing the best care for all animals possible, given limited resources. It accepts all lost, wounded, sick or unwanted animals, treats them and finds them new homes when possible.

Shelter Director Ashley White said she believes the local shelter has become recognized beyond the county and state through their networking and a drive to have more presence with other shelters and rescues in this state and others.

She explained the shelter is funded primarily through donations, fund raising and grants, and since Hurricane Michael, followed by the Corona Covid-19 Virus, many people have found themselves with less money to donate.

“Our funding is lacking since these events, and it has forced our hand to become more resourceful,” said White. She added, that while they do have wonderful support groups of people in the community, they rely heavily on such sources as the Fogg Foundation and writing grants.

“We have done a lot of work to improve the care of the animals, by attending seminars and learning about new procedures,” said White. One example cited by White and also Humane Society Chairperson Dennie Nichols is the creation of the Dogs at Play yard completed in the spring. “I think the people who conducted that week-long training were impressed with what we have been able to do with so little to work with,” added Nichols.

Nichols said the shelter is overwhelmed with owner surrenders that are higher now than they have ever been since the two major losses to the community economics. “People cannot afford to keep them. It has been a difficult year and 18 months for all.” The shelter is still closed to the public and arrangements made only through appointments. “We have to protect our employees,” added Nichols.

Asked about the building fund that the Humane Society has worked on for the past few years with fundraisers and special donations, Nichols said there is $499,000 being held in that account, which is only about half-way to where they need to be.

She added that they have ceased their fundraisers in the last couple of years in deference to what other people are going through financially, but added they are thankful for the support received from the city and county governments and hopes those relationships with the local Humane Society will continue.

Back to the top 30 listing, the Top Dog Tips concludes their awards based on recognizing those animal shelters out there that go above and beyond for their mission to help stray pets and deserve recognition for their outstanding work.

Both White and Nichols are honored and pleased the local shelter was named. Nichols said she is proudest for the employees to receive this honor—that it gives them a needed spring in their steps.