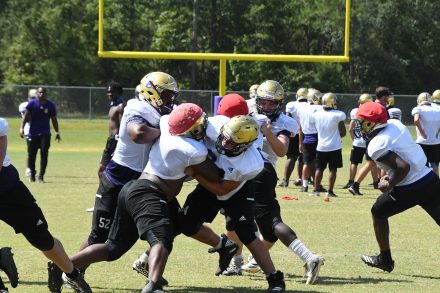 The Bainbridge High School Bearcats football team hit the field Monday morning for their first day of padded practice, and defensive line coach, Brian McCorkle was impressed with the effort.

“Hopefully this will be the deepest group we’ve had in a while depth wise,” McCorkle said.

McCorkle said everyone on the defensive line has been working extremely hard. He said there’s not one standout, but multiple players working together to make plays.

“They’re a very cohesive unit, who do a good job communicating with one another,” he said.

McCorkle said they have a nucleus of returning players, who all started for them last year. Fans should expect to see Simpson Bowles, Jackson McCullough and Jashon Mitchell all back on the field, along with some talent who McCorkle said have been role players for the defensive line.

Sesan Edwards, Devon Smart and Dariyon Smart all are ones to look out for. McCorkle also mentioned that Octavius Green is back healthy and ready to hit the field.

“Like I said, we have some depth, now it’s just time to see how they do with pads on,” McCorkle said.

Prior to padded practice, the defensive line has focused specifically on communicating, lining up properly and being physical.

“We want to be more physical than we were last year,” he said.

McCorkle is excited to see the boys get out on the field. He said they are an extremely close and attentive group, and most importantly they seem to really enjoy playing the game of football, which is what it’s all about.