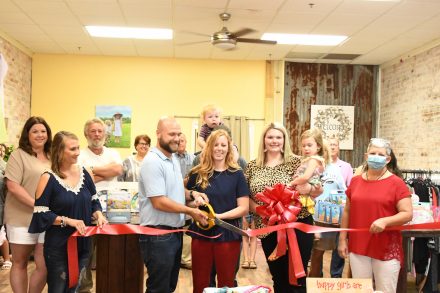 Merchant has worked at the home of Avie Lou and Brother since she was 18-years-old.

Formerly known as Isabee’s, Merchant began working there when her hairdresser Nickee Wilkinson took it over. Wilkinson worked right next door at the Hair Works and let Merchant make Isabee’s her own.

During her time meeting customers and working at Isabee’s, Merchant realized she was doing what she loved and had no desire to leave. She said she eventually worked up the courage and asked Wilkinson if she could buy Isabee’s and turn it into her own store and Wilkinson agreed.

The name stems from Merchant’s two children, Avin and Harrison.

Merchant said her family, along with she and her husband call their daughter, Avie Lou and her daughter calls Harrison “brother.”

When trying out names for the store, it seemed like a perfect fit for their family and the new chapter Merchant was embarking on.

Merchant said she has always enjoyed customer service, but that is one of the things she is most looking forward to with her own store.

“I want to strive to make it right,” she said. “I want to see old and familiar faces, along with new ones and provide them with what they want.”

Customers will have a variety to choose from, as Merchant admits she has a bit of a “shopping problem.”

Merchant said she tries to have new stuff in the store weekly or bi-weekly. She aims to order items that customers have specifically mentioned they are looking for.

In addition to that, customers can always pick out an item and have it monogrammed or appliquéd, which is one of Merchant’s favorite things to help with.

For shoppers who don’t always have time to visit the storefront of Avie Lou and Brother, Merchant offers a VIP group on Facebook, where she posts exclusive sales, pre-orders and pictures of new goodies that have just become available.

She also hopes to promote the store and the arrangement of items through the Chamber of Commerce and the Shop Local Saturday deals.

“It’s always been a dream of mine to become a Chamber member,” Merchant said. “That’s another step along the way that I’ve been successful and made it.”

Merchant hopes to show other Chamber members her passion for her job and make new friends and hopefully life-long customers.

“This is a dream come true and I thank everyone who has helped me make it this far,” she finished.