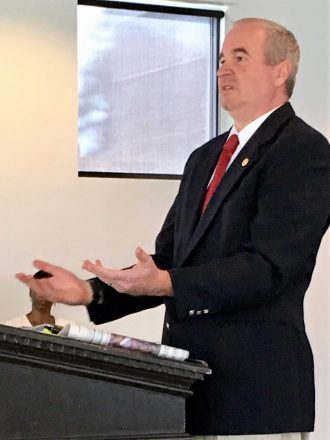 Joe Mulholland has covered many cases in Decatur County and will now take on a Glenn County case.

Mulholland will be taking on the trial of Glynn County Police Chief John Powell, who was indicted on February 27, according to the Brunswick News for violating his oath of office, influencing a witness and perjury; all the result of alleged misconduct in the aftermath of a police department scandal that imploded the Glynn- Brunswick Narcotics Enforcement Team.

Mulholland said he was assigned the case when no one else would take it, however he thinks it logistically makes sense.

Mulholland said this program has allowed the team to have very little backlogs, which is another reason they are able to take on the case so quickly.

“We are really lucky to have been able to use this program,” Mulholland said. “It has allowed us to move through hearings seamlessly so far.”

Mulholland said this case will look a little different than what he is used to.

He said typically in a case like this, attorneys may file motions to suppress evidence, but Powell was already indicted when he took the case, so he is dealing with motions that have already been in place.

Mulholland said he will head to Glenn County on August 10 for pre-trial motions, but really has no idea what the time table on the case will be and how long it may last, due to the new restrictions with COVID-19.

However, he is ready to hit the ground running with defending his client.

“Someone has to do it, and we are really looking forward to it,” he finished.

Friday morning Bainbridge Public Safety responded to a car accident on Shotwell Street that sent one driver to the hospital.... read more