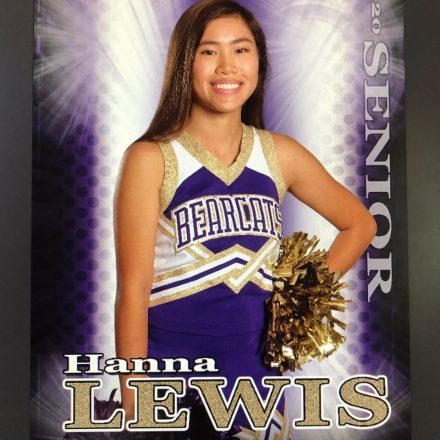 Recent Bainbridge High School graduate and varsity cheerleader, Hanna Lewis has a new accomplishment to add to her resume; she is now an official member of the Georgia Tech cheerleading squad.

Lewis had not always envisioned herself cheering for a college team, in fact she said it was the last thing on her mind when looking into colleges, but that changed when representative from Georgia Tech Cheerleading reached out to her and asked if she would consider trying out.

Lewis decided she would go through the process because she did fulfill the Georgia Tech cheerleading requirements of good motions, showmanship, ambassador qualities, tumbling skills and stunting skills.

However, due to COVID-19 the tryouts were nothing like she expected.

“COVID completely changed the cheer tryout process,” Lewis said. “A week before I was set to go to Atlanta to tryout, I received an email saying that the tryouts would be virtual.”

The tryout process ended up being through the virtual meeting site, Zoom.

Lewis said the zoom tryout was held as close to the process of in person tryouts as possible. She was required to do all of the material on the call in front of the judges.

She said two people auditioning would go at a time and perform the material. Luckily, Lewis was able to use the cheer room at BHS to tryout and make all the necessary stunting and tumbling moves.

Although the tryouts were virtual, Lewis left the judges with quite an impression.

Lewis said the head cheerleading coach for Georgia Tech told her whoever coached her did a great job.

Lewis acknowledged that she couldn’t have done this without her cheer coaches.

“My past coaches (Sydney Day, Lea Hawkins and Mycla Palmer) are the only reason I made the team,” she said. “They constantly pushed me past my comfort zone and never gave up on me; they believed in me when I didn’t.”

Now thanks to their efforts and Lewis’ determination, she will be cheering on the Georgia Tech Yellow Jackets every weekend.

Lewis said she is most looking forward to cheering at Bobby Dodd Stadium and truly being an ambassador for Georgia Tech.