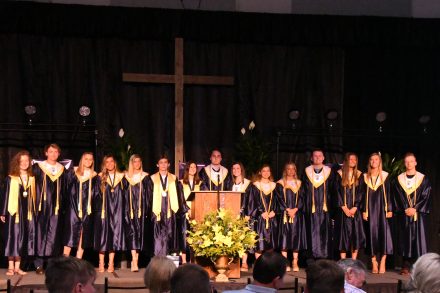 The ceremony began with a processional, before Avery Andrews gave the welcome, followed by Spence Butler leading the guests in prayer. The Pledges to the flag, the Christian flag and the Bible were then given by Arthur “Seth” Parker.

Sellers thanked everyone for joining the class in the monumental occasion. He told the audience that while the journey to get to graduation had its ups and downs, he places more emphasis on the people he’s met along the way.

“I must say that all of you have inspired me like no others,” Sellers told his classmates. “That is something I cannot overstate.”

Sellers explained that being in high school was not always the greatest feeling, but having his friends by his side made it worth all the trouble.

Sellers acknowledged that everyone going their separate ways after graduation is bittersweet. However, the knowledge that everyone is forging their own paths brings him solace, as he knows the people who brought him so much comfort will soon do that for others across the state.

“With our sights set on what is to come, we may achieve our ideals, while helping others along the way,” he said.

Following Sellers’ speech, Ava “Caroline” Wells shared the athletic accomplishments of she and her classmates through the years, before Executive Director, Cile Warr and Counselor Joan Shiver shared some of the graduates’ academic milestones.

All graduates of the 2020 class were recipients of the HOPE Scholarship, while nine of them were also Zell Miller Scholarship recipients. In addition to these scholarships, students earned more than $670,000 in funding toward their academic future.

Upon a round of applause, Emellia Woodrum introduced her smart, hard-working best friend and co-valedictorian, Sarah Beth Griffin.

“Challenges make life interesting, but overcoming them is what makes life meaningful.”

Griffin reflected on how the Class of 2020’s life changed in a matter of moments, but their resiliency and strength is what brought them to this night.

Griffin said her strength is derived from her friends. She then gave personal anecdotes about how each classmate had impacted her personally and what they brought to her, along with many others’ lives.

Widner first thanked everyone who had guided her to get there tonight.

Widner began by explaining how she had consulted the Internet prior to writing her speech and it encouraged graduates to go out into the world and make it a better place, but Widner questioned how could she do that in such a time of uncertainty.

She then reminded her fellow classmates of her father’s advice.

“Sweep around your own mat,” she told them.

She explained that it meant take responsibility of your own life, before you try and change others’ around you. She referenced a Bible verse that also suggested taking responsibility for your sins before pointing out others.

“By fixing yourself, you might start fixing the world,” she ended.

Following her speech, Garrett Donalson, Danielle Parker and Gabriel Parker then sang “In Christ Alone,” before turning it over to Hallie Jordan to introduce graduation speaker and School Board Member, Edwin J. Perry III.

Perry acknowledged that it had been a tough year for the class of 2020, but it never meant God forgot about them or had forsaken them.

“Be sure your trust is in Christ and His completed work in the cross,” he said. “This is what is internally important.”

He reminded them to listen to their parents, but most importantly listen to what God has planned for them, and always stay strong and firm in their faith.

“Remember to whom you belong,” he finished.

Graduates were then presented with their diploma, while memories were shared by Donalson and Kate McRae before Laura Posey closed with a prayer.

Danceline and Colorguard prepare to pump up crowd this upcoming season

Band camp for the Bainbridge High School Marching Band kicked off on July 13, where the danceline and colorguard are... read more