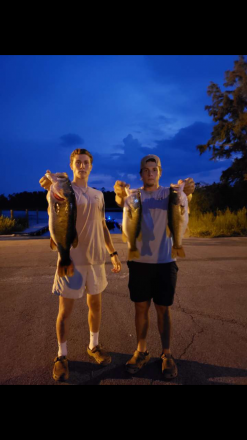 Dalton Harrell and Griffin Long hold up some of their catches from the Tuesday night fishing tournament.

Friends Dalton Harrell and Elijah Tyler recently started a Tuesday night fishing tournament after the tournament scene slowed down due to COVID-19.

Harrell said the idea started out when some fishing friends began hosting a Thursday night tournament. However, he noticed many were not able to attend and the sizes of the fishing boats were driving many who may want to participate away.

That is when Harrell and Tyler decided to host a tournament of their own on Tuesday nights with a no motor restriction.

For every five boats, there is a payout with $5 out of the $40 entry fee for big fish. If there are not enough boats for second place, Harrell said they will at least get the money from their entry fee back.

The first Tuesday night fishing tournament, Harrell said they saw about seven boats, which is not as many as they thought would show up, but for their second tournament they are expecting between 10-15 boats.

Harrell said the main competitors in their smaller tournament are locals, but it’s open to any age. He said he sees high schoolers, adults and people of his age all out there competing together.

With the opening date to school pushed back, Harrell said they will continue to host these tournaments as long as they can. He looks forward to seeing everyone out there and encourages everyone to check out his or Tyler’s Facebook page for updates on when tournaments are.

The Georgia High School Association Board of Trustees voted unanimously on Monday to push the start of the 2020 football... read more