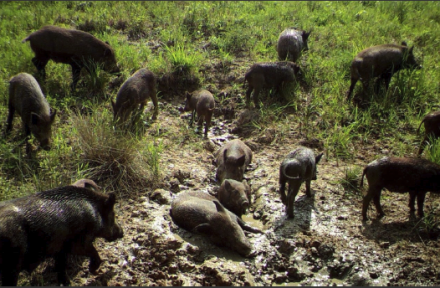 Feral hogs have invaded several area farms and continue to wreak havoc on their crops, along with their lawns.

The Post Searchlight was contacted recently by a homeowner in the Faceville area regarding the damage being done by feral hogs to farmers and homeowners in their part of the county.  Farmers, especially peanut, corn and tomato farmers, have long been impacted by the wild hogs. Now, our contact said the hogs have torn up their lawn.

While this is hardly a new situation, nor one confined to Faceville, perhaps it is time for an update and information on efforts being made to control the wild hogs.

We reached out to the Georgia Department of Agriculture and the response says “for the past several years that department, along with UGA, GA DNR, USDA WS and Georgia Association of Conservation Districts, have held meetings statewide to inform farmers, hunters and other interested individuals about feral swine control.”

This year, due to the Covid-19 outbreak, a virtual feral swine workshop and trapping demonstration was held March 3 by UGA Extension in Griffin, Ga.

Speakers included wildlife specialists, wildlife biologists, veterinarians and others who addressed the problem, the regulations and laws, health issues, and effective control techniques.

Some farmers, either alone or jointly, have contracted with individuals and companies intent on eradicating the animals. And yet they persist.

Bryan Hayes of the Mitchell County Extension Office, who is currently representing Decatur County, says the situation is only getting worse. “They are showing up in new places where they weren’t before.”  He knows of one peanut farmer in the Cairo area who had to replant several acres of peanuts three times because the hogs were digging them up before they had a chance to grow.

Hayes referred to it as a population explosion, saying each female has three litters a year, with 10-12 hogs in each litter. “It doesn’t take long to get out of hand.”

His best advice to those having problems is to start trapping them.

Reference was also made to the Flint River Soil and Water website that gave information on a feral swine outreach campaign that was launched May 29, 2020, providing outreach, education and resources for all Georgians to work together to control feral swine populations.

It describes “feral swine as a non-native, invasive species that not only cause economic impact through crop loss, livestock loss, and infrastructure damage, but are a threat to native and endangered species and contribute to soil erosion and water quality issues.”

It further defines feral swine as domestic pigs that have gotten loose from pens and reverted to a wild state.

Persons dealing with this problem may contact the above agencies for education and referral assistance.