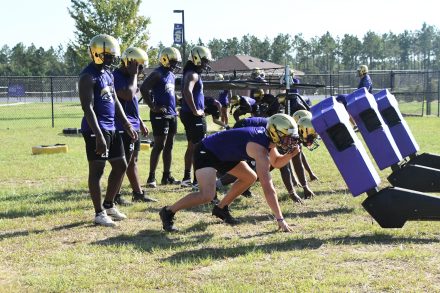 Bearcats practiced Tuesday morning after the GHSA announced their would be a 10-game football season with the delayed start of Sept. 4. Players worked on catching drills and strength.

The Georgia High School Association Board of Trustees voted unanimously on Monday to push the start of the 2020 football season back two weeks for a new start date of September 4. However, all 10 games of regular season will still remain, along with all five weeks of the playoffs.

Upon hearing this information, Coach Jeff Littleton and the Bearcat football team hit the ground running at Tuesday morning’s practice.

“I’m excited to have football,” Littleton said. “I was hoping to start on time, but change is fine; change happens all the time, we just want to play football.”

Littleton said he had been mentally preparing the players for anything that might happen at this meeting, so now they are just focused on the season and ready to get on the field.

The delay in start time allows for two weeks of extra practicing in padding, which Littleton believes will only help the team. He said they have been focusing on the fundamentals and just making sure the team is improving every day. Littleton said one thing they have stayed away from and avoided is the virus; players are staying healthy and practicing good hygiene to make sure they are game ready.

Littleton said they are really working to instill that everyone knows their role on and off the field.

While everyone is on an equal ground right now and putting in hard work, Littleton said the offensive line is the biggest void, with four new players joining the starting line, but leaders have really stepped up to make sure they don’t have a void for long.

The team is excited to face off against Gadsden County at home for their first game on September 4.

The best place to read about your teams

I realize it might be a little tacky for a sports writer to recommend the work of another publication. At... read more