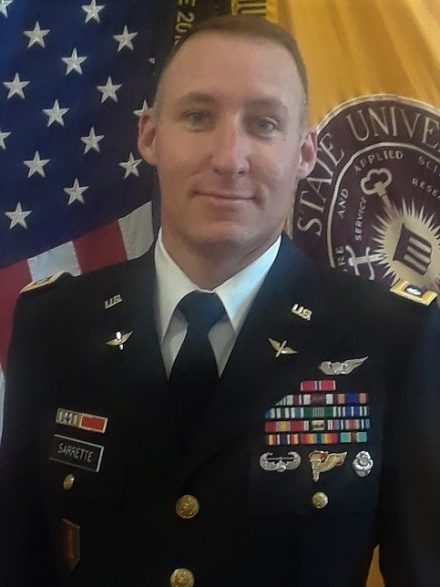 Lt. Colonel David “Buck” Sarrette smiles after announcing his retirement after 20 years in the U.S. Army.

Bainbridge native retires after 20 years of service in U.S. Army

Lieutenant Colonel David “Buck” Sarrette, an honor graduate from the Bainbridge High School Class of 1996, retired from the United States Army recently after 20 years of service.

Sarrette was a charter member of the BHS Air Force JROTC program under the command of Colonel Breedlove.

Sarrette said during high school he was always interested in joining the Air Force, but after two of his buddies decided to go into the Army, he followed.

Upon returning to the states, Sarrette served as a Brigade Commander of the 16th Combat Aviation Brigade based out of Joint Base Lewis-McChord in Washington and most recently serving as the Commander of the Army ROTC program at Mississippi State University.

Sarrette encourages any high school student who may be thinking of joining the Army or Air Force to follow their dreams.

“Don’t sell yourself short,” he said. “Go after your dreams, it will provide with a lot of opportunities and you will gain the friends of a lifetime.”

Sarrette said the friendships and camaraderie are one of the things he will miss the most about the Army.

“There are stories you gain in the military that you can’t gain anywhere else,” he said. “Both good and bad, you and your comrades are experiencing them together and you’ll never forget them.”

Sarrette will now take on a civilian position as Program Manager in the Department of Research and Development of Experimental Aviation at Mississippi State University.

Sarrette will still be heavily involved with aviation as he works in the Raspet Flight Research Laboratory. This will allow him to study, research, develop and test Unmanned Aircraft Systems, which is something Sarrette said that interests him.

“Mississippi State University’s Raspet Flight Research Laboratory (RFRL) is a historic, nationally recognized leader in the field of experimental aviation research,” Sarrette said. “Founded in 1948, Raspet stands out as one of the University’s most long-standing and prominently established research entities with a 70-year history of excellence. True to its heritage, today Raspet continually advances modern concepts in experimental aviation through the research, development, testing, and evaluation of Unmanned Aircraft Systems (UAS) and their associated technologies”

Sarrette said he believes the Army led him to this job.

“It gave me a lot of the skills that I took with me into the job market,” he said. “I highly encourage young people to get involved because it will provide you with leadership skills that many jobs look for.”

Sarrette looks forward to continuing his work in Starkville with his wife, the former Nicole Conn and two children.

“It’s been a good ride and I’m thankful,” he finished.

Crooked Oak Golf Club in Colquitt will be the scene of the Harvest House of Hope Annual Golf Tournament this... read more