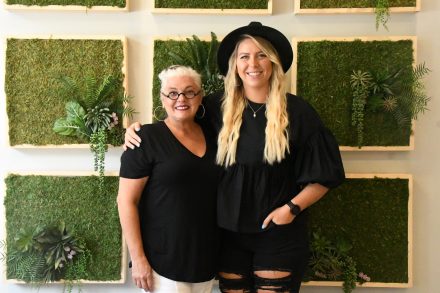 Hairstylists Kym Moore and Lindsay Unfriecht have been friends for years; they have worked and trained together, and now they are adding a new chapter to their friendship fairytale- opening a salon together.

Moore and Unfriecht worked at Jameson Shaw in Atlanta for three years together before Moore returned to Bainbridge and left her clients to Unfriecht.

Unfriecht began as Moore’s assistant, where Moore trained her.

“It is a soft blended haircut; it lays like shingles on a roof,” Unfriecht said.

When cutting hair, they are trained to follow the shape of the face and frame it with the hairstyle. They believe in customizing haircuts and styles based on the body structure and creating a hair color that complements individual’s skin tones and eye color.

Training in French hair cutting was no easy feat, both women have traveled the world taking classes and teaching classes on their ways.

Moore has traveled to Italy, Paris and the Netherlands teaching French hair cutting classes. In addition to that, she has achieved styling 16 magazine cover shoots.

Unfriecht followed in Moore’s footsteps, traveling and also learning the art of balayage.

“I’ve learned to free hand paint balayage,” Unfreicht said. “I mimic the way the sun would lighten the hair naturally.”

Unfreicht taught in Australia, before returning to the United States to offer classes to other young stylists.

Both women are well accomplished in their field and are excited to begin working together again.

“It feels great to be back with someone who knows the French hair cutting,” Moore said. “It’s like we are back in our old salon again.”

While they are excited to be back working together, they never expected it to happen.

“I never expected her (Unfreicht) to move back to Bainbridge, and when she did I was all for it,” Moore said.

Unfreicht returned to Bainbridge during COVID-19, and while home she realized how much she missed it. She said that is when she texted Moore and told her, she would like to work together again.

They then began working to open Salon 3084 in downtown Bainbridge, which is named after the coordinates of Bainbridge.

They opened the doors to the salon in June, where Unfreicht began accepting new clients.

“I love being downtown,” Moore said. “It’s a different atmosphere and I get to see all types of different people.”

As for what comes next, Moore and Unfreicht hope to install a beverage and snack area in the back of the salon along with an additional seating area for customers to lounge.

“We are just looking forward to building something beautiful,” Moore finished.

It has been a long and winding path, but Bainbridge native, Angelica Turner finally turned her dreams into a reality... read more