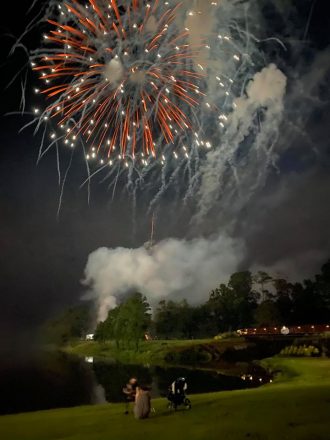 Residents of Bainbridge drove out to the Boat Basin on Saturday night, where the City of Bainbridge put on a firework show accompanied by music for guests to enjoy.

City Fireworks Show was a success

As some communities cancelled Fourth of July fireworks, the City of Bainbridge proceeded with a different version this year— a drive in event, where people parked at the Boat Basin or on adjoining streets and watched the 15-20 minutes show from their cars.

Special Events Coordinator, Laura Brown, said that although the city held off on the other usual events, such as the music and children’s activities, “We were always going to have fireworks.” It was just a matter of developing a plan where they could assure social distancing.

Brown confirmed on Monday that the show went off as expected. “There was a good turnout and people complied with the rules. It was most definitely worth the effort. We could not have asked for anything better.”

Traffic patterns worked well and safely. Everyone was out by 10:30 p.m. following the show, according to Brown.

Bainbridge Decatur County Humane Society is pleased to have received a Rachael Ray Save Them All COVID-19 Relief Grant from... read more