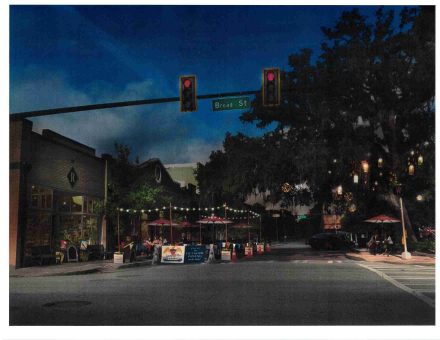 A rendering drawn by the Carl Vincent Institute shows what the proposed parklet would look like on Broughton Street.

Plans made for ‘parklet’ on Broughton Street

Glover explained parklets are typically an expansion of the sidewalk and project approximately 6-8 ft. into the street, but have pedestals that allow the park to follow the slope of the street so everything is level.

Glover said she saw parklets popping up around Georgia and across the nation, prior to COVID-19, but during the shutdown the parklets became even more popular to help with social distancing.

“Parklets encourage pedestrian traffic,” Glover said. “We are fortunate to have green space at Willis Park, but this will allow for another public space and eating area.”

Ideally, Glover would like to see the proposed parklet be a public space that has ample tables and chairs with umbrellas to shade the heat, along with a bike rack, flower planters and possibly café lighting.

The Carl Vincent Institute helped Glover prepare a rendering of what the space would look like, but in order to accommodate this parklet, Broughton Street would become a one-way street headed West.

Glover insisted that all the angled parking would remain in front of Willis Park, along with parking still available at Reeves, Youmans and Gardner and Edward Jones.

She explained the reasoning behind this location was due to the traffic. Parklets usually need to be on a side street so they don’t interfere with trucking routes, which is why this location worked. However, the park is mobile and easy to take down in the event the location doesn’t work.

Glover plans to have the parklet in location for at least three months to get public feedback, before making it a permanent location or moving it elsewhere. If successful, she would like to implement another parklet on Water Street.

The parklet will not be officially approved until after July’s City Council meeting, where there will be a public hearing.

Upon approval, Glover will begin ordering materials. She hopes to then partner with downtown businesses to help incorporate their ideas into the public space as well.

By: Carah Jones Editorial Intern  Since 2004, 5 Points Cleaners has been a trusted dry cleaning service located at the... read more