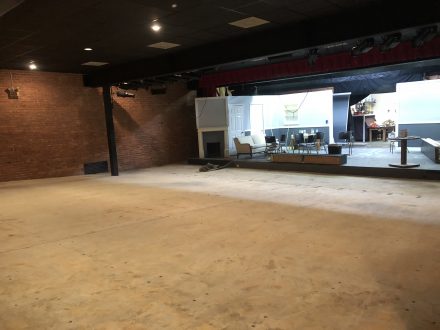 If the Bainbridge Little Theatre is able to open its 46th anniversary season in September with the production of “Rumors,” patrons will be able to see some of the renovations currently being made to the theatre itself, thanks to money received from the Fogg Foundation.

Henry and Barb Intili are now the co-managers of the theatre and saw the chance this summer to make some big changes while the theatre is inactive due to the Corona Covid 19 virus.

Henry Intili explains that the building itself is very old and never had any insulation, so one of the first projects was to have foam insulation blown into the attic. He said he has noticed a big difference in the internal climate of the theatre as he works on construction there this summer.

The next big event was the removal of all the old seats and carpeting. Plans are to install bright red carpeting in the aisles only – the areas where people walk. The rest of the flooring will remain bare – either painted or stained.

“This will greatly improve the acoustics,” according to Henry, who noted that with brick walls and concrete floor, it will be easier to hear the actors on stage. As for the seats, he said all were old and many broken. New seating will be more secure and comfortable.

The Fogg Foundation also helped provide for some major innovations begun last year when all new LED lighting was installed at a cost of $40,000. “It is more intense and cooler for those on stage,” explained Henry. A new lighting and sound booth was also created at that time.

The Intilis, who are famed for their set construction, have built all new smooth, wooden flats that interlock, thus replacing all the old flimsy cloth ones that shook and shimmied in the breeze as actors moved about on stage.

Costs for the current projects are in excess of $50,000. Except for the insulation, the rest of the work is being completed by the Intilis and volunteers from the theatre, thus creating a big financial savings. “We would never be able to make these improvements without the generous funding from the Fogg Foundation,” said Henry.

By: Carah Jones  Editorial Intern A couple of days after a local hero rescued three people from a potentially fatal... read more